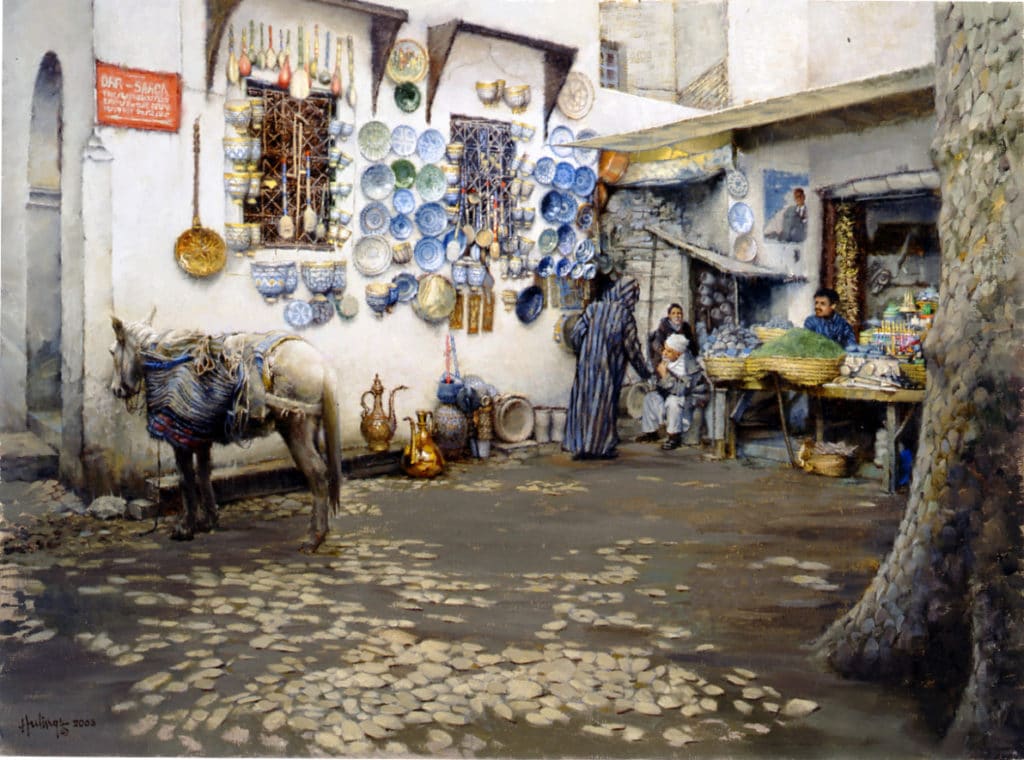 “In the case of this painting, the courtyard itself is Marrakesh, but every other element has a different source…”

Clark Hulings painted this timeless Moroccan market in 2003. Within Marrakesh is the old fortified city, the Medina, which was founded in 1070 and is designated by UNESCO as a world heritage site.

Marrakesh Souk is a great example of my father’s continuing interest in material gathered on earlier travels. Over the course of his career, he accumulated over 97,000 slides, which he used as source material. Often, after completing a major piece, he would take a week to look through this material for inspiration on what to paint next. Sometimes it would be something he had sourced fairly recently. Other times it could be a scene he had completely forgotten about, or had not been thrilled with at the time, but now saw something new and exciting in it. Most of the time, it was a combination of things that he would put together to make a fabulous concoction — a “recipe”, as he called them. Maybe a market in Southern Mexico, with an Italian bicycle, french flowers and some chickens from a friend’s yard….even he had no idea what he’d come up with.

In the case of this painting, the courtyard itself is Marrakesh, but every other element has a different source: the donkey and people are from other Moroccan locations, the hanging plates are mostly from Spain, the brass bedwarmer hanging above the donkey came from Turkey, and the two brass pitchers from Syria. He acquired the bedwarmer and pitchers during his 1959-60 travels. They remain in his studio to this day.

Moving You Around Deliberately

Master technique is also on display in this picture. You may notice your eye being drawn to the upper left corner by the modern pop of red in the sign, and then falling to the white donkey with his woven saddle bag. From there it travels across the swirled cobblestones of the empty foreground and climbs the tree trunk to the figures at the back. The man sitting behind the table is looking up at the standing customer, which again pulls your eye past that vignette, up and across the plate-filled wall and back again to the red sign, where you start all over again, each time taking in more of the rich detail of the plates, tree bark, and human interaction. This is classic composition — Hulings at his best.

A Study in Blue and Gold

For all of that, though, what I think about most when I look at this painting is that it is a study in blue and gold. In fact, that could have been its title. I believe that is what interested my father in it, why he cobbled together this particular “recipe”. He was seeing how much he could convey with slight, subtle shifts.

Luckily for me, I get to look at Marrakesh Souk everyday, because it hangs in my dining room. I was visiting my parents when my father was finishing it, and I fell in love with it. I talked him into giving it to me, which wasn’t easy because its such a great painting, and he was planning to put it in a group show! Sometimes it really helps to be the daughter.