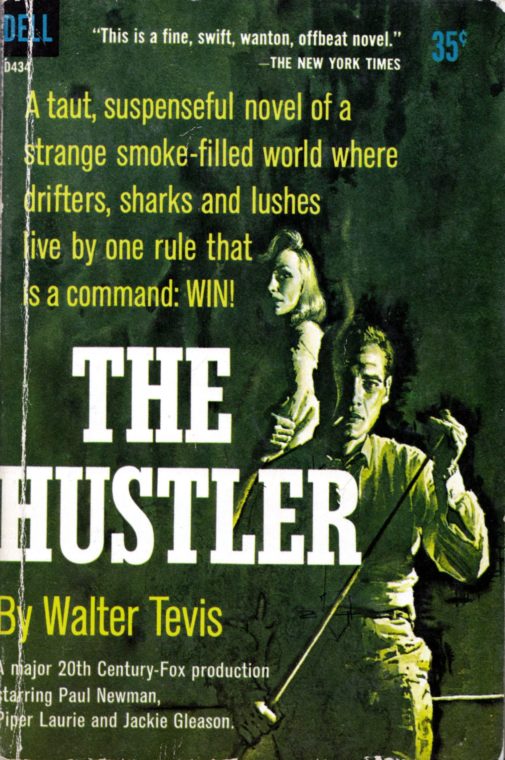 Here’s a great example of the process commercial illustrators used to go through to create covers for books and etc. The images of work my father did for the book cover of The Hustler, by Walter Tevis (DELL Books, 1961). One is a sketch he started out with, the other is the final cover, which includes other figures, etc.

My father was quite popular among art directors because he lived in Manhattan, and could work on short notice. Many of his peers lived in New Jersey, Westchester or on Long Island, and it was much harder for them to get into the City quickly for a meeting. It was also much harder to messenger materials (like book manuscripts) to them. My father, on the other hand, was just a subway ride away.

Typically, he would go to the publishing house in the late morning, to be given the manuscript, and ideas for the theme or plot point the publisher was hoping to capture, per the anticipated marketing or advertising campaign. He would take this written and verbal information home with him, read the book, and then start sketching. Often he would work through the night and return to the publisher’s offices first thing the next morning with options for them to review. Then he would go home, sleep a few hours, and either start a new series of sketches, if nothing from the previous round had been accepted, if they had settled on something, start painting. Again he would work until he finished the piece, sometimes all night, and again he would return the next morning to present it, hoping no further rounds would be required.

A funny aside to this: his father was an “early bird gets the worm” adherent. He believed one should be up working when it was light! Often he would call my father in the morning to catch up, and he would wake him up. My grandfather could never be made to understand that my poor father had only just gotten to sleep, not because he had been out partying, but because he had been working all night, sometimes for more than one night in a row. Hard-working people work during the day, right?