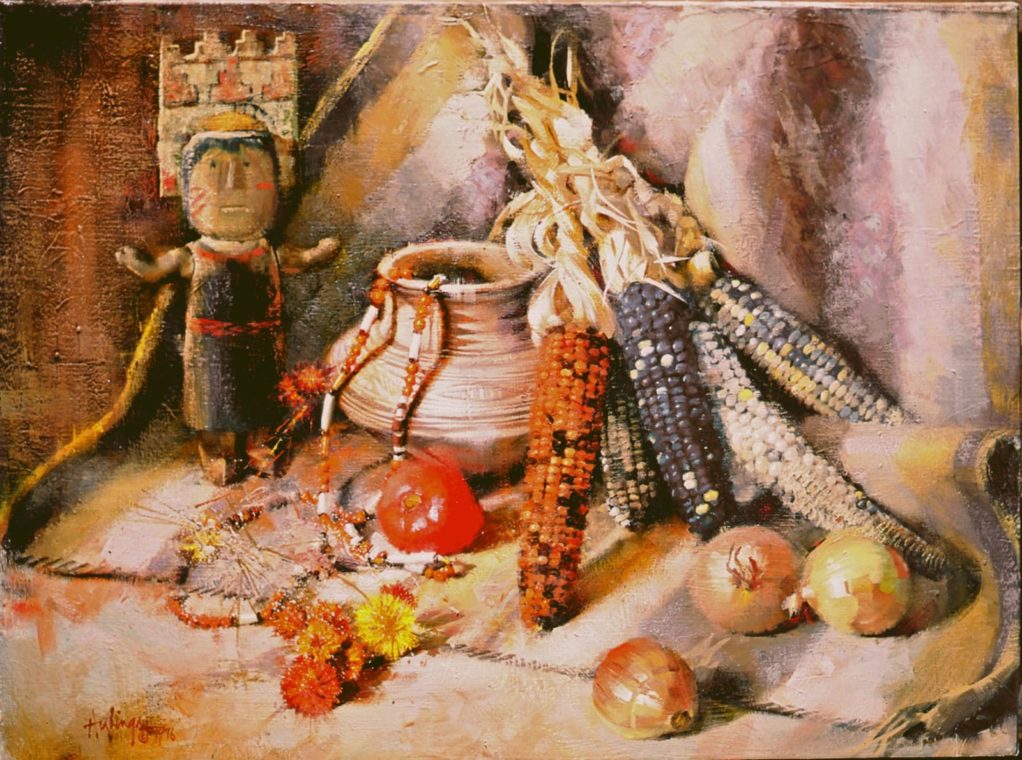 In honor of the upcoming thanksgiving holiday, I’ve decided this week to showcase a Southwestern scene. Those of us not raised in the Northeastern part of the United States have a different relationship with this holiday. Where in New England there were pilgrims, in New Mexico there were Spaniards, who arrived in the territory eighty years before the Mayflower set sail and who worked to subjugate the locals for almost three centuries, until relinquishing the job to Mexico after granting it independence in 1821. Throughout that time, the native population had only one, twelve-year respite from the Conquistadores, which they earned the hard way by successfully prosecuting their 1680 Pueblo Indian Revolt.

My father painted this Indian Still Life, in 1976, and included it in his one man show A Collection of Oil Paintings by Clark Hulings in Oklahoma City, OK, that same year. Here’s what he had to say about it at the time: “I usually spend more time planning a still life than painting it. I begin with three times the number of objects that I will use. I like to have some kind of theme — or at least use items that are somehow related each other. This painting contains things that were made or used by indians. The figure is a Hopi social dancer doll, similar to a Kachina doll and made in about 1970. It’s a very rare artifact made of cottonwood root. The blanket is Navajo and the bowl is a pre-Columbian relic from northeastern Mexico. To me, the fun of still-life painting is in trying to capture the texture and personality of an onion, a tomato, corn, wool, etc., while creating a pleasing, harmonious picture.”