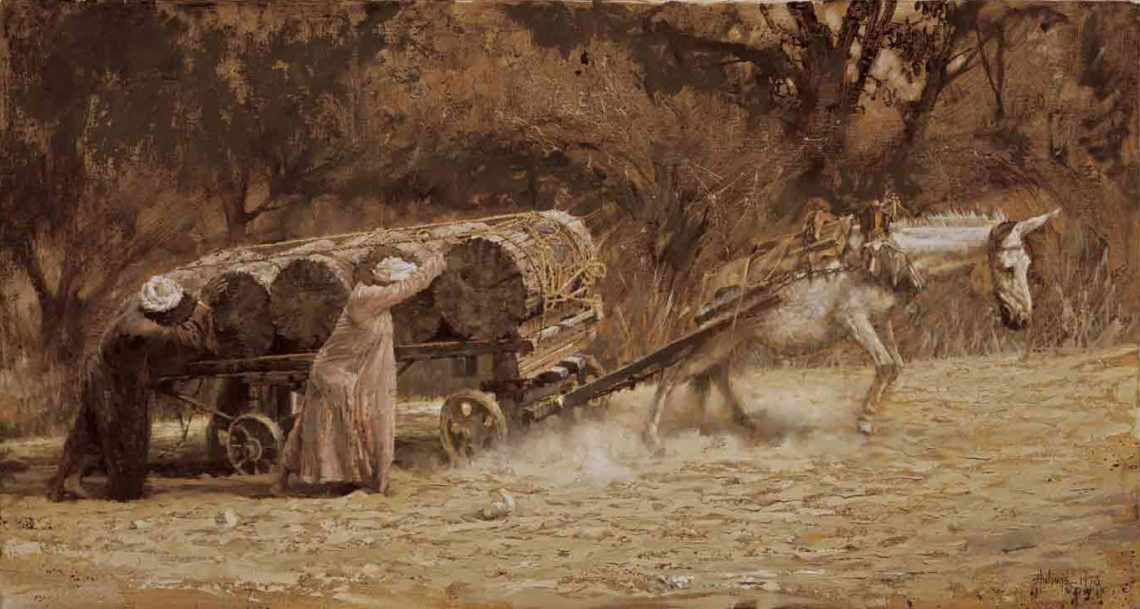 Although there are strong, recurring themes and subjects that appear in my father’s work, he did not often paint the same scene or composition twice. The exceptions are scenes he painted in watercolor while traveling, some of which he later recreated in oil. In this case, I have an embarrassment of riches:

The second item can no longer be seen, except in the photo or with a black light, of course, since the oil paint lies on top of it. The scene is Egyptian, and the watercolor was done on location in Aswan, where my father spent six weeks before it was flooded by the dam in the1960’s. The oil painting, entitled Burro Pulling Logs as Aswan, is dated 1973.

I don’t know whether the finished drawing was done before or after that, if it was a study for the painting, or a stand-alone work. Regardless, this subject clearly held a lot of significance for my father, and it certainly contains multiple hallmarks of his oeuvre: people and animal working, a rural setting, a donkey, complex architectural elements and details, lots of different textures and movement, etc., etc. My father was known for working with light, but I think in this case he was interested in the challenge of capturing all of that movement.

The drawing is entitled, Helping to Push. My mother and I used it when we started the Clark Hulings Foundation for Visual Artists, because it so perfectly conveys the idea of one artist supporting the next generation of artists as they build their careers. Now, the sculptor, Glenna Goodacre, has interpreted the drawing in clay as a bas relief to assist The Foundation. It’s been cast in a limited edition in bronze. So this subject has a fifth iteration, half a century after my father made that first watercolor. To view the latest iteration, click here.

PS – If anyone knows where that watercolor is, please let me know!!