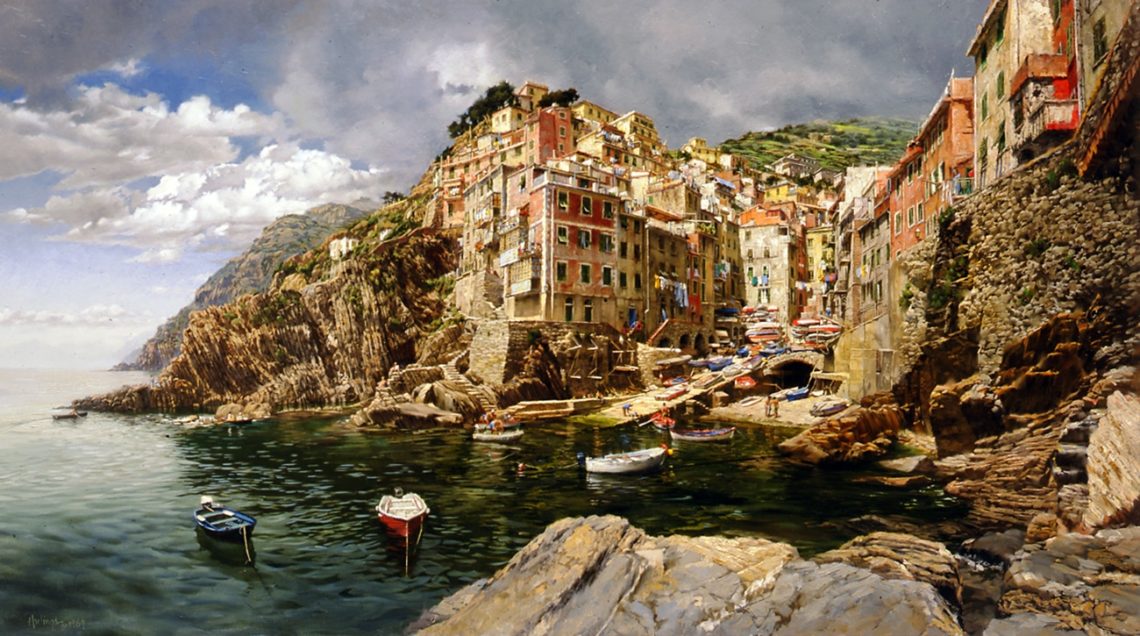 The sun was already high in the sky and it was hot when we arrived at the top of this Quinque Terre village on the Western Coast of Italy. We started exploring the narrow corridors and worn staircases that serve as pedestrian walkways, slowly wending our way down toward the harbor. After about half-an-hour my mother decided she’d had enough, sat down on a stoop and told us to come back for her. I followed my father as he continued down, down, down through the maze passageways.

When we reached the sea and turned our backs on it to greet the rainbow of buildings watching us my father got very excited. The problem was that the little beach wasn’t deep enough to take it all in and record it. Without hesitating, he scrambled right out onto the giant rock in the foreground. “Wait,” I cried, ” let’s hire a boat.” but the fishermen had not yet returned so there was no one to hire.

I stood in the sun and watched the tide rise. “Come back, your rock is vanishing!” But my father could not tear himself away. The scene was just too great. He was photographing and calculating angles so he would know when to return to see the scene skim lit from each side, and backlit in the morning. Only then would he know the best way to paint it. “When did the sun set yesterday?” he yelled to me. “Come back NOW,” I replied.

But it was too late. The fishermen began to return, and I hired one of them to row out and rescue my father from his fantastic, dangerous vantage point in the Ligurian Sea. By the time we climbed back up and found my mother on her stoop she was famished and furious. “How’d you get wet?” she demanded.

My father spent another entire day at Riomaggiore, and this painting is the result. Definitely worth the drama. I hope my mother doesn’t read this one.