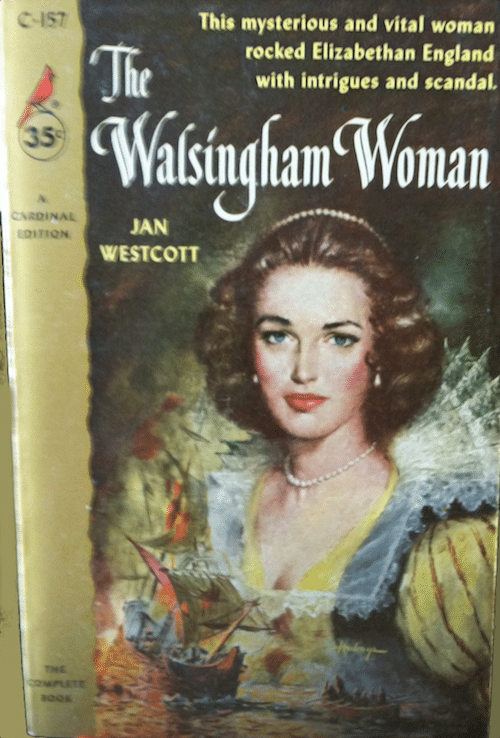 “We’re living in stressful times now, but you can imagine that Queen Elizabeth I really had her hands full…”

Today, for a little historical escapism, we’re going back to Elizabethan England. This 1953 Cardinal edition of Jan Westcott’s The Walsingham Woman features Clark Hulings’ cover illustration. In this partial inventory of Queen Elizabeth I’s headaches, we see two burning Armada ships on the lower left. We’re living in stressful times now, quarantining at home, but you can imagine that Elizabeth I had her hands full with the threat of Spanish invasion, trouble in Ireland, and serious political issues within her inner circle.

If all of that weren’t enough, The Queen’s most trusted advisor, Secretary of State Sir Francis Walsingham, died in 1590—leaving behind a recently-widowed daughter. Still very young and suddenly without husband or father, Frances Walsingham was in debt. Armed with inside knowledge of the court and reportedly very attractive, she strategically worked her way through the aristocratic ranks to restore her fortune. Frances ran afoul of Elizabeth I on and off many times over the years, particularly by marrying Earl of Essex Robert Devereux, who was The Queen’s favorite. Devereux was executed after attempting a coup in 1601. Two years later, Frances married for the third time. If she were around today, Frances might have her own reality series. Or maybe that’s just what it took to make her way in the world while in the shadow of one of the most powerful monarchs in history.

On the cover, we see a beautiful blue-eyed woman, who could be either Frances or a very stylized vision of Elizabeth I. She wears a variation of the ruffled collar that was all the rage in the 1500s that can be seen on most portraits of Shakespeare; along with pearl-drop earrings, necklace, and headband. The yellow puffy sleeves with the vertical stripe are fabulously eye-catching and the Hulings signature is also in yellow. It’s a lower neckline than is strictly authentic—classic Elizabethan fashion would have been high, square, and a push-up—but Hulings knew his mid-century audience for romantic historical fiction, and gave the wardrobe a 1950’s twist.

Philadelphia-born author Jan Wescott wrote eleven books, with several of them selling over a million copies and on The New York Times bestseller lists, including her debut, The Border Lord—which also had a Hulings cover. Unlike many of Hulings’ commercial illustrations, we do have the original oil painting that was the source for this illustration, which you can see below.

We hope that you and yours are staying healthy, finding lots of good books to read, and taking good care of each other. It’s a time when many of us have a few extra moments to zoom out and consider the big picture, including challenges and resilience in history.