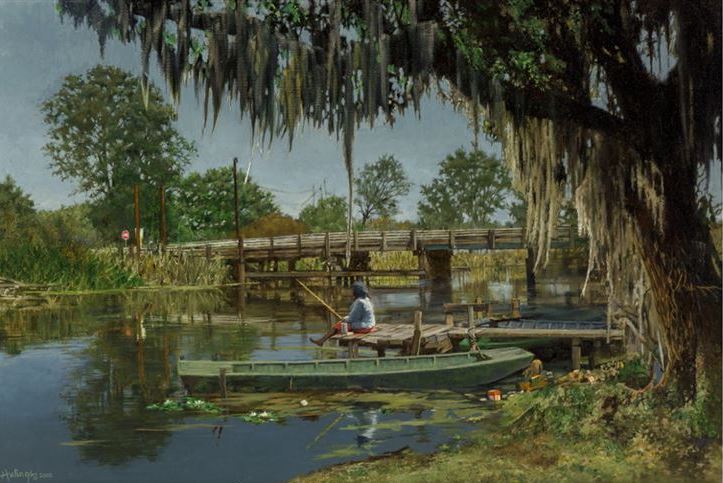 “There is no State in the Union, hardly any spot of like size on the globe, where the man [sic] of color has lived so intensely, made so much progress, been of such historical importance.” —Alice Dunbar-Nelson

Louisiana was Clark Hulings’ family home for many years. In his own words from A Gallery of Paintings:

“My parents moved to Baton Rouge when I was a teenager, and I considered it home during all my bachelor years. When I lived there painting portraits I had occasion to travel around the southern part of Louisiana many times and I fell under its spell.”

In this 2008 easel painting, he brings us all under that spell. A fisherwoman concentrating on her daily work is framed by a tree covered in soft Spanish Moss—which is characteristic of the region and favorite Bayou subject matter for Hulings. It’s an intricate composition, where the figure is situated between the lines of the green pirogue dugout canoe and the bridge behind her. The reflections in the water are complex as well, mirroring the silver-green light that we also see in many of his works from France.

Although this is clearly a study of a traditional way of life (with an interesting twist that it was painted almost fifty years after his formative Louisiana era) Hulings has thrown in contemporary reference in the form of a stop sign on the left side of the bridge. One of several small red accents peppering the composition, it’s a typical Hulings move to feature both a surprising red accent, and something that references the contemporary world in what would otherwise be a completely pastoral setting. It quietly suggests the question: how long will this way of life continue? It also reminds us that we all are always living in the “modern world,” whatever that may be at the moment.

African-American fishermen and women—from smaller subsistence entrepreneurs like this woman, to larger saltwater oyster and shrimp operations—have had a series of rough blows; from the legacy of redlining policies restricting access to the best oyster beds, and more recently, the Hurricane Katrina recovery, and the 2010 BP oil spill. It’s a specific economic and cultural niche in the state, as commercial fishing was a successful transition from sharecropping in communities such as Pointe à la Hache, which filmmaker Nailah Jefferson explores in the documentary Vanishing Pearls.

Louisiana-born Harlem Renaissance poet Alice Dunbar-Nelson said: “There is no State in the Union, hardly any spot of like size on the globe, where the man [sic] of color has lived so intensely, made so much progress, been of such historical importance and yet about whom so comparatively little is known. His history is like the Mardi Gras of the city of New Orleans, beautiful and mysterious and wonderful, but with a serious thought underlying it all. May it be better known to the world someday.”

Bayou Fisherwoman is a stunning 22 x 33″ slice of life, and it sold through Heritage Auctions in July 2020. Congratulations to the lucky new owners!