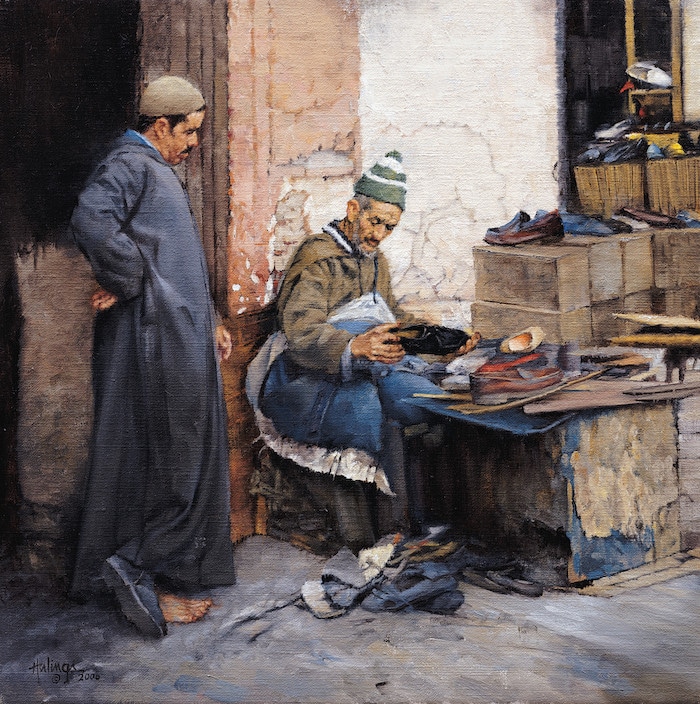 “The darkened doorway brings a little depth and drama to the scene, and a good reason to seek the light, air, and walk-up customers to be found outside.”

Clark Hulings is a great storyteller, whether he’s giving us a few interesting hints about a situation, saying something directly, or suggesting a more abstract idea. This week, we’re traveling to Morocco in the middle of a work day. The cobbler in his green-and-white striped hat is assessing the repair job. The man behind him is keeping a steady eye on his progress, and is quickly identifiable as the customer when you notice that he has one bare foot. The missing shoe shows us an unfolding story: a problem and a probable successful solution (although from the cobbler’s expression that might not be the case).

The blues in this painting are prominent, from the customer’s grey-blue robe, locally called a djellaba, and the brighter blue of the fabric on the cobbler’s lap. You’ll see the Hulings signature red accent in the sole of one of the other shoes on the work area: that one’s especially notable for the shoe-lovers out there who enjoy the red soles of Christian Laboutins. Cleary this cobbler enjoys a well-established clientele. With the bright yellow shoe near the top right of the frame Hulings reminds us that money doesn’t always buy taste. The darkened doorway brings a little depth and drama to the scene, and a good reason to seek the light, air, and walk-up customers to be found outside.

A Month of Prayer

Morocco is largely Sunni Islam, although there are also small Christian, Jewish, and Bah’ai populations as well. It is historically a very tolerant, inclusive country. The Muslim world is about to start celebrating Ramadan—the holy month of fasting—on May 5th. Many Moroccans buy new djellaba robes for the extra prayers that take place. The daytime fast is usually broken after sundown by eating a date, and lentil-tomato-meat soups called harira are very popular. There are also holiday sweets such as sellou almond cookies and chebekia honey-sesame pastries. Because Ramadan follows a lunar calendar, it happens at a different time each year. This year will be harder for those observing it in the Northern Hemisphere, because it is light for many hours every day in May, which makes for a long fast.

Hulings painted this piece in 2006, but the source material would likely be from the late 1980s when he was traveling in North Africa. This painting is featured in the 2007 catalogue: Timeless Beauty: Pursuing Life’s Textures, which you can pick up at the Clark Hulings Store.