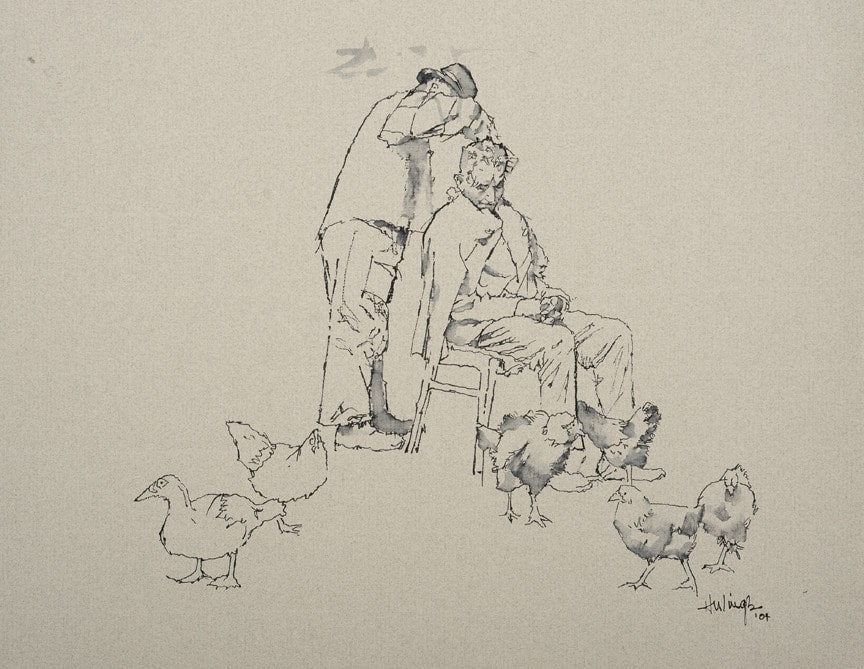 “Is the barber making a house call on a farm or are there just birds everywhere in this town?”

It seems that every part of the world has its own traditions about hair. We take our relationships with our barbers and hairdressers pretty seriously. They’re available to catch up on news and weigh-in on personal and political struggles, and we see them at key moments in our lives as we get ready for important occasions. In New York City on a Friday night, you’ll see all kinds of barbershops and salons open late, and everyone in a chair has a friend or two in tow. It’s the official warm-up for parties all over town.

This little moment in Romania is its own party. Although they could never compete with the number of donkeys featured in his work, chickens do strut around in a fair number of Hulings pieces, and here they are pure humor. He’s arranged the figures in a triangular composition, which is strong, simple and uplifting. Both men’s clothes have really interesting, rumpled textures. The barber’s elbow is lifted so he can reach the back of his customer’s head, and although we can’t see his face, the physical posture shows his concentration on his work. The customer’s face is inclined down, with his gaze towards the animals. The free-range chickens look like they are going where they please, pointed in all directions, yet Hulings has them carefully arranged in two diagonal lines. The guy on the left looks suspiciously like an intruding duck, with markings on his face and webbed feet. Is the barber making a house call on a farm or are there just birds everywhere in this town?

Clark Hulings spent a month in Romania in 2004, which is when he drew Haircut with Chickens—it was also the year he received New Mexico Governor’s Award for Excellence in the Art of Painting. The 2000s were a time of frequent travel for him, and he was in Mexico, France, and Italy for weeks at a time. Romania was the inspiration for a series of paintings from this decade, many of which are studies of people working and living with livestock. Roughly 85% of Romanians identify as Eastern Orthodox, and will be celebrating Easter this weekend.

If you’re in the market for a Hulings reproduction and you enjoy spirited European chickens, travel a few countries west and take a look at the Portuguese Farmyard gicleé.