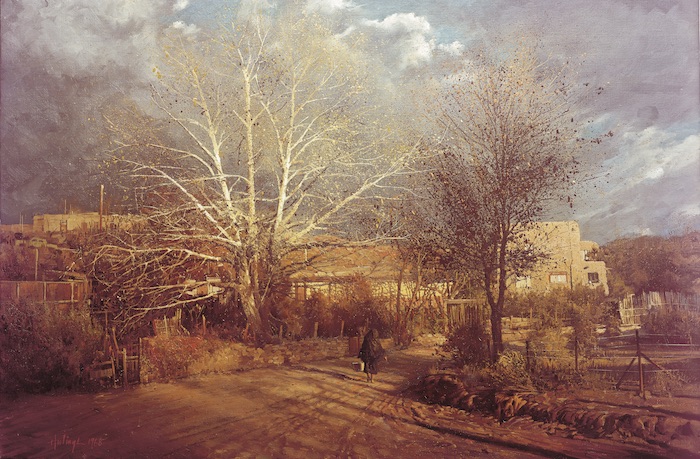 “The theatrical arc light of late afternoon was shining brilliantly on that white cottonwood tree. I think that is the moment when we decided to make the move.”

By the late 1960s, Clark Hulings was successfully pursuing the easel painting era of his career. 1967 was the year he won the Gold Medal from Allied Artists for  Onteniente and the Council of American Artists Award from the Hudson Valley Art Association for Restaurante Vicente—and the year after, he painted this evocative landscape, Off Palace Avenue.

New Home for The Hulings

It was a time when Clark and Mary were considering moving to Santa Fe, New Mexico. In Hulings’ own words:

“This painting was done a couple of years before we moved to Santa Fe. We were making visits with the prospect of settling there. The area was still pretty much as I remembered it from the time I had lived there twenty-five years before. It was fall, and the crisp, thin air was pleasantly incensed with piñon smoke. The theatrical arc light of late afternoon was shining brilliantly on that white cottonwood tree. I think that is the moment when we decided to make the move. That lady in black hauling water must have been, even then, a relic of bygone times. Or possibly of my imagination.” —A Gallery of Paintings by Clark Hulings

This is a truly beautiful moment to contemplate, especially because fall officially starts in a few days. You can almost feel the crisp quality of the air that Hulings references above; the drama of the light on the cottonwood is heightened by the contrast of the dark splatters of the tree beside it. He’s positioned the tire-marked road so it swoops around and pulls the viewer’s eye to follow the mysterious woman in black. You will see all kinds of deep red accents tucked into the fencing and stonework on the left side of the road, which shows the quality of the late-day light and enhances how our eyes track the bend in the road. It’s a painting that shows a deep sense of place, and evokes both beginnings and endings.

New Mexico has a vibrant arts scene featuring layers of culture from the Native American artists, to Spanish Colonial styles, to the famous modernists such as Georgia O’Keefe, to the wonderful group of professional artists working there today. We were literally “off Palace Avenue” and right around the corner from this scene this week for the Clark Hulings Fund Art-Business Conference. Working with the next generation to follow in Hulings’ footsteps, 44 working visual artists came together to learn the key entrepreneurial skills that allowed Hulings to steer and sustain his career and make his talent known to the collectors and museums who now cherish his work. These are the nuts and bolts of an art career—often hidden in plain sight, but as much a part of the foundations of an artist’s work as a life-drawing class or stretching canvas.

If you would like to meditate on this fall moment at home, Off Palace Avenue is featured in the book  A Gallery of Paintings by Clark Hulings. To learn more about how The Clark Hulings Fund is actively continuing Hulings’ legacy in Santa Fe and across the country, visit the CHF Website for an overview, and learn about how to contribute here.