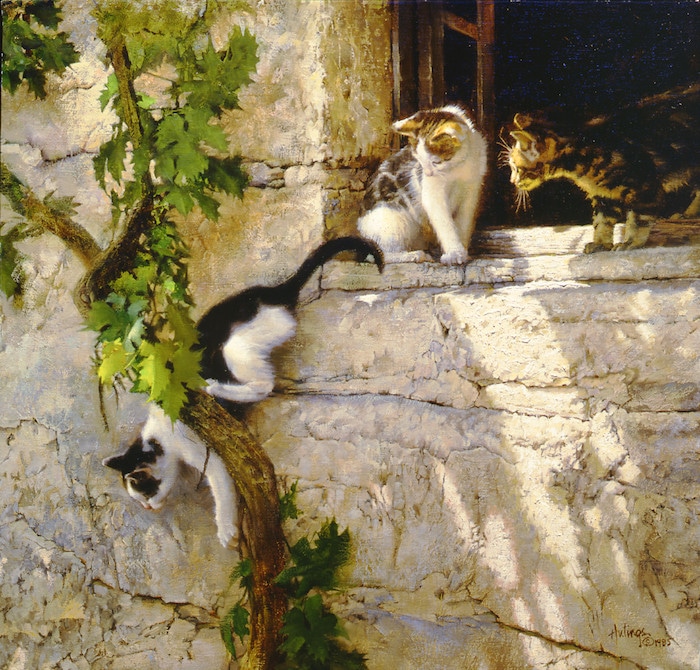 “She is either stuck or plotting a spectacular descent, or a bit of both…”

Cats are quirky at the best of times, and kittens are non-stop action and exploration, as this study shows. Hulings painted Three Kittens and a Grapevine in 1985, so the source material is most likely from his three-week trip to Northern Spain, or perhaps from the time he spent in Northern Italy in the same year. Evidently, the travel in 1985 was a little too much, as Hulings also spent some time convalescing from double-pneumonia in Switzerland. He was a lifelong ambitious traveler, which was just one of the ways he was completely dedicated to his work.

The bright stucco and clear sunlight are such stars in this playful painting. It is almost, but not quite a square at 20 x 21″. The dappled sunlight is a show of chiaroscuro—light and shadow—over the wall. This is a good example of Hulings’ masterful way of placing detail where he would like to direct our eye: we see the sharpest and most intricate play of cracked texture on the lower left where the black and white cat focuses her gaze. The lush green on the winding vine is a color accent and creates another diagonal.

Stuck in the Middle With You

Because she is a cat, this animal is not jumping straight down to the ground; instead, she has wedged herself behind the vine—and is either stuck or plotting a spectacular descent, or a bit of both. The calico and tabby kittens, with fur and whiskers beautifully backlit, are watching in fascination. Without ever being literal about it, Hulings’ easel paintings show unfolding action with a keen sense of story: the viewer often knows if we have been placed in the beginning, middle or end. In the case, we’re squarely in the middle, sharing a feline curiosity about how it might turn out.

We do have a few Hulings kittens available for adoption: Family Portrait (Almeria Cats) is set in Spain and features some good stucco textures and unruly little guys on a window ledge. It’s available as an 8 x 12″ or 16 x 24″ giclée reproduction at the Hulings online store.