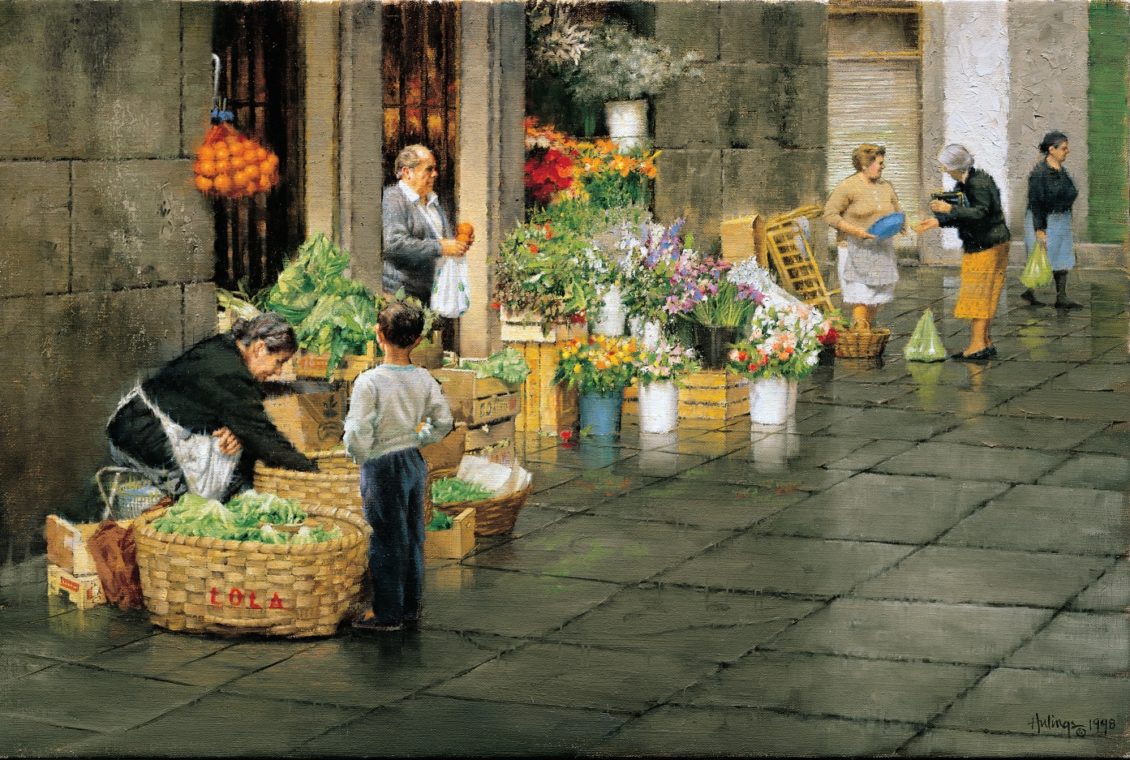 The Rain in Spain

Our few days of storms on the East Coast, and the recent reminders about the importance of buying produce (and especially romaine lettuce!) from sustainable farmers and local sources, inspired our look at Hulings’ 1998 painting, Lola’s Lettuce.

The Edge of the World

The capital of the Spanish autonomous region of Galicia, in the northwestern corner of Spain, Santiago de Compostela is an ancient hub of activity. Before the apostle James’ tomb was rediscovered in about 814, this area was considered by some cultures to be the finis terrae, the edge of the known world, home only to Roman burials. In a time when much of the Iberian peninsula had been engaged in years of conflict with the Moors, the site was a beacon of hope for the Christian community, and a tradition of pilgrimage began soon after the discovery. Various settlements developed along the walking route, and the new city on the sacred site was named after St. James, which is the English translation of Santiago. The pilgrimage is referenced in Chaucer’s Canterbury Tales and Dante’s Paradiso, and the old town is designated as a UNESCO World Heritage Site.

These days it’s not exactly the edge of the world as we know it, with its booming tourist industry as hundreds of thousands of people retrace the old walking routes of the Camino de Santiago. Hulings’ outdoor market painting has a somewhat timeless quality; definitely not instantly identifiable as the late 1990s — although in his unsentimental way, he has not edited out the plastic flower buckets or shopping bags. Our main character is wearing traditional European widow’s black clothing and selling lettuce to the boy, who perhaps is in charge of bringing home the salad that day. It’s quite personal to have her name indentifying her on her basket: she’s not just a generic farmer or vendor, she’s Lola. The lovely alliteration of the two ‘L’s in the title suggests a connection between the person and what she’s selling.

“I titled this painting assuming that the name painted on the basket was indeed that of the lettuce seller. The scene is in Santiago de Compostela, Spain, where the rain falls mainly everywhere —hence the damp pavement.” — Clark Hulings

Were it not for Hulings’ clever orientation on the diagonal, this composition would be a bore — just a line of vendors. However, he interjects the viewer right into this rainy-day produce market by pulling us along from bottom left to top right, starting with the star of the show: Lola and her lettuce. We note the little boy and the bag of oranges, and then move along to the flowers in the middle of the painting: loosely-rendered but carefully arranged in a triangle with bright red geraniums accenting the top. The strip of white paint on the wall on the upper right is the last of a series of white highlights that lead our eye along the diagonal line. To balance the upward trajectory, Hulings accentuates the street’s easy downward slope. Hulings shows great restraint in this painting. He takes a risk by placing most of the elements on one side, but the risk really pays off. Rather than drab and one-dimensional, the entire orientation makes us welcome the empty space. It balances all the activity of the market in an unexpected way and leaves plenty of room to study the wet grays of the pavement, showing a complex play of muted colors in the reflections, and letting us appreciate even more Lola and all the other farmers who have schlepped the lettuce of their labor to sell on a rainy day.

If you’d like to see Lola’s Lettuce anytime, you can find it on page 14 of Hulings’ 1999 Catalogue.