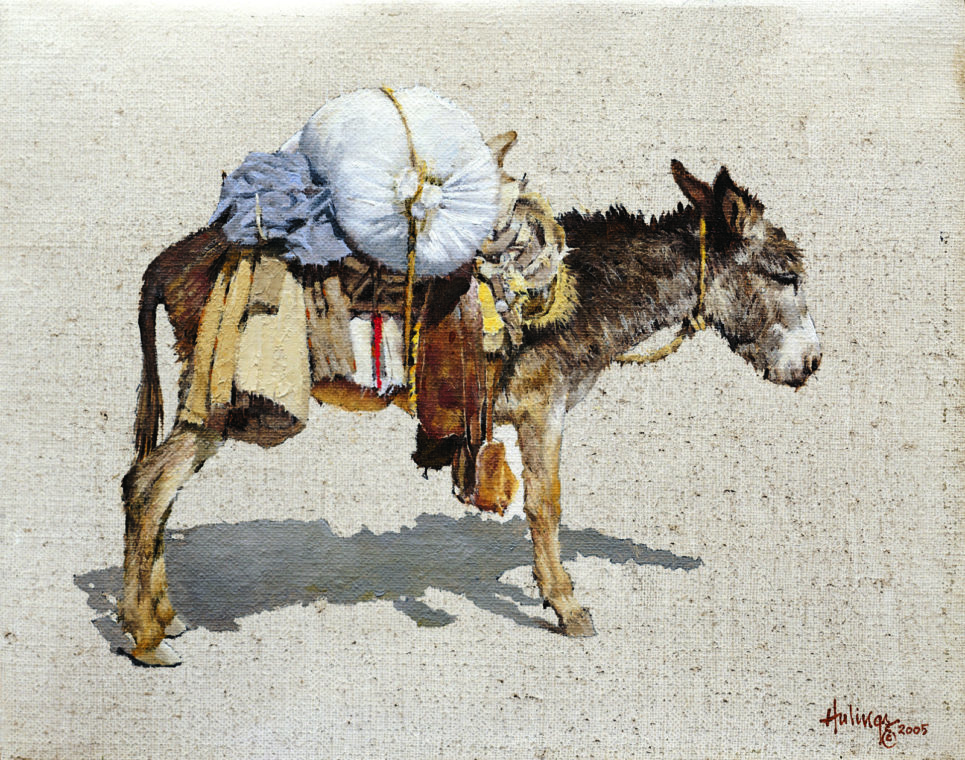 The Donkey Who Had it All

“Usually, each donkey got his moment, and then my father moved on to another for the next scene. This one just had it all: the proportions, the color, the right amount of shag…”

This little painting has done a lot of work. It appeared on the 20th Anniversary Edition of A Gallery of Paintings by Clark Hulings. The editor, Paula Mele, my father and I were all excited when we realized that the size of the revised edition would make it possible to place this gem at its actual, full-size (8 x 12″) on the cover. So, when you look at that book, you see this painting as it really is.

“Usually, Each Donkey Got His Moment…”

My father was famous for his donkeys. He drew and painted them consistently throughout his career, adding them to large works, and creating whole compositions around them. This particular guy shows up in a few different works, which is unusual. Usually, each donkey got his moment, and then my father moved on to another for the next scene. This one just had it all, I guess: the proportions, the color, the right amount of shag, and the fabulous assortment of cargo, arranged somehow securely on its sturdy back.

The combination allowed my father to play with all of his favorite elements and really challenge himself: hard and soft edges of various fabrics, sunlight and shadow, heavy paint on leather sacks and bare wash that let’s the canvas texture of bleed through as a background. There are many subtle shades of beige and brown and taupe, but there’s also that stripe of modern red right down the middle.

This donkey was put up for auction as part of my father’s solo show in 2007. He was 85, and every one of the 35 paintings in the show sold immediately. This one went to a major collector in Oklahoma. But you can look at him too, if you have one of the books.