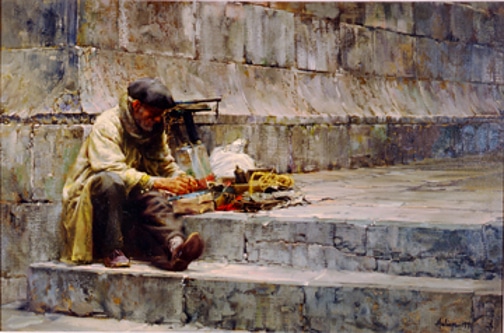 Shoes to Wear Down Here

“…ultimately people want some suits and dresses and shoes to wear down here.” — Martin Luther King Jr. “I’ve Been to the Mountaintop” 1968

At the Clark Hulings Estate, we often talk about Hulings’ artistic commitment to telling stories about the everyman. In Valencia Peddler, a 1972 work from Valencia, Southeast Spain, we see a man who has stopped to rest his feet and sort through his belongings. They may be his personal possessions carried with him for a life without a fixed address, or perhaps he plans to sell some of the items. Although worn and lived-in, his beret, long topcoat and leather shoes show a certain formality.

The craftsmanship and value of the huge pieces of cut marble of the building and steps he sits on suggests he’s a humble man living in a place that has known great wealth. The almost ‘L’ shape of his seated position is in tune with where the wall meets the step. As well as being a beautiful way of showing the man being connected to this place, it’s a striking visual composition. The signature Hulings red color accent is near the man’s hands, inviting us to notice how intently he’s focusing on what they are doing. Two-thirds of the painting is leading off geometrically and mysteriously to the right, begging the question: where exactly is he? How long will he be allowed to stay there? As well as maybe worrying about him for a moment, this painting also suggests that we respect his fatigue, his focus, and his quiet moment alone with his things.

There are still so many calls to action in Dr. King’s body of work, and here we are in 2018 needing to heed them more than ever. There’s something about living through times of conflict and change such as his, and ours, that can both wake us up and shut us down as individuals, and many of us come “back to earth” and become grounded again through returning to the relative simplicity of our daily work and our small contributions to the big picture. Clark Hulings made it his work to offer up examples of this for us.