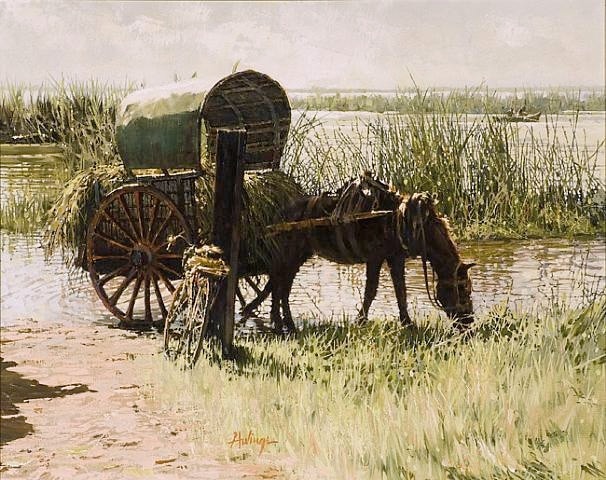 “It is interesting to think about how our lives have evolved over the 90+ years since my father and his family took their weekend trips in Spain.”

As the summer officially starts to wind down and we start the back-to-school feeling of the fall, we thought you might enjoy the subtle shades of relaxing green in this painting. It is reminiscent of Louisiana, with its bayous and moss. However, the wagon gives this scene away as being Spanish. The cool colors belie the heat of the day; I’m sure that horse is likely relishing that drink.

El Saler is a seaside village South of Valencia. The painting is from the 1960s, but my father would have visited there many times, beginning when he lived there as a child in the 1920s. His father, step-mother and sister would often take weekend day trips to the countryside to escape the heat and bother of Valencia. Sometimes they would head Northwest into the mountains, and other times South, to the coast. Almost always the outing culminated with a meal of paella. In the mountains the iconic Spanish rice dish would contain chicken and sausage, at the beach they would find shellfish instead. Regardless, they would also have salad and finish with oranges and, if the children were lucky, ice cream.

As the summer of 2018 comes to a close, it is interesting to think about how our lives have evolved over the 90+ years since my father and his family took their weekend trips in Spain—and to notice how many things remain the same. The world is shrinking, but it’s still pretty big. Not all of us will eat paella on our own weekend escapes, or watch a horse hitched to a wagon, but I know my son will hope for ice cream after consuming his grilled cheese and fries or rice and beans.

From Dating to Marriage

My father completed El Saler Lazy Afternoon between 1963 and 1966, using source material gathered during a trip there with his step-mother in 1967. During those years he had begun signing only his last name, but had not yet started to date the completed works. It was my mother who recommended dating them—because she is an organizer by nature! They married in 1966. I’m sure it was sold originally at Grand Central Galleries in New York.

We have a couple of reproductions of Hulings’ Spanish paintings available in our Etsy store: the spectacular Ontentiente; and for the animal lovers we have some Spanish kittens, Family Portrait – Almeria Cats.