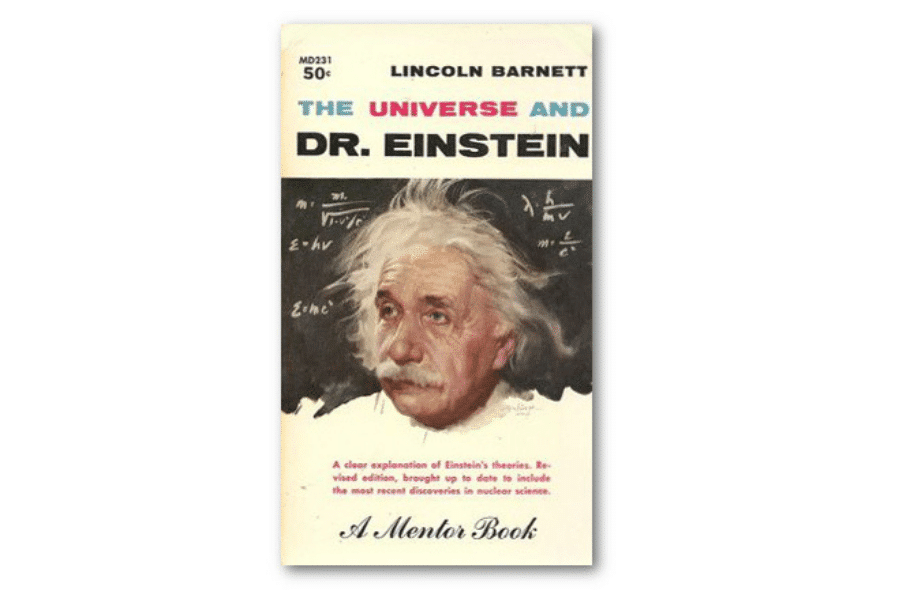 “Hulings has done a spirited portrait of Einstein here. The swoop of his wild white hair reaches up to the top of the frame, and trails off on the right side with a soft edge that could easily be a chalk smudge.”

While many of us can’t claim to have an in-depth understanding of physics, we all know Albert Einstein as an icon, even if it’s only for the instantly-recognizable bushy hair and mustache. There’s something endearing and accessible about a Nobel Prize-winner and one of the great scientific minds of the twentieth century looking like a bit of a character. It’s even more amazing that he developed his groundbreaking theories of relativity while working as a patent clerk. He and his wife arrived in the USA in 1933 as immigrants fleeing Nazi persecution, and Einstein became one of its most distinguished citizens.

Author Lincoln Barnett was a journalist and editor who worked for many years at Life Magazine. The Universe and Dr. Einstein apparently had a stamp of approval from the Doctor himself as being one of the clearer explanations of the theory of relativity in physics. Not bad for a book that cost 50 cents when it was published in 1958. Barrett’s work is part of the great tradition of journalists and broadcasters who distill science to accessible storytelling for the public. Now we have examples such as Neil deGrasse Tyson inheriting the Carl Sagan legacy, a recent new Netflix series with Bill Nye (The Science Guy), and oceanographer Jacques Cousteau’s son Jean-Michel continuing the family tradition. All of them are helping with the the heavy lifting of keeping the culture and credibility of science alive.

Chalk it Up to Experience

We’re continually impressed by the range of literature from the 1950s-60s that has a Hulings cover. Hulings has done a spirited portrait of Einstein here, and it’s one of the rare book illustrations for which we have a high-resolution scan of the original watercolor. The swoop of his wild white hair reaches up to the top of the frame, and trails off on the right side with a soft edge that could easily be a chalk smudge. The chalkboard has an unfinished, ragged bottom edge, and the equations around his head suggest that they’re popping out of his first-class imagination. Because Hulings actually had a degree in physics, we have good reason to think the board shows other real equations in addition to the classic E=mc2. Do any of our scientist or mathematician readers know? Our other ongoing research project is to find the the originals of these covers, so drop us a line if you know where this one is.