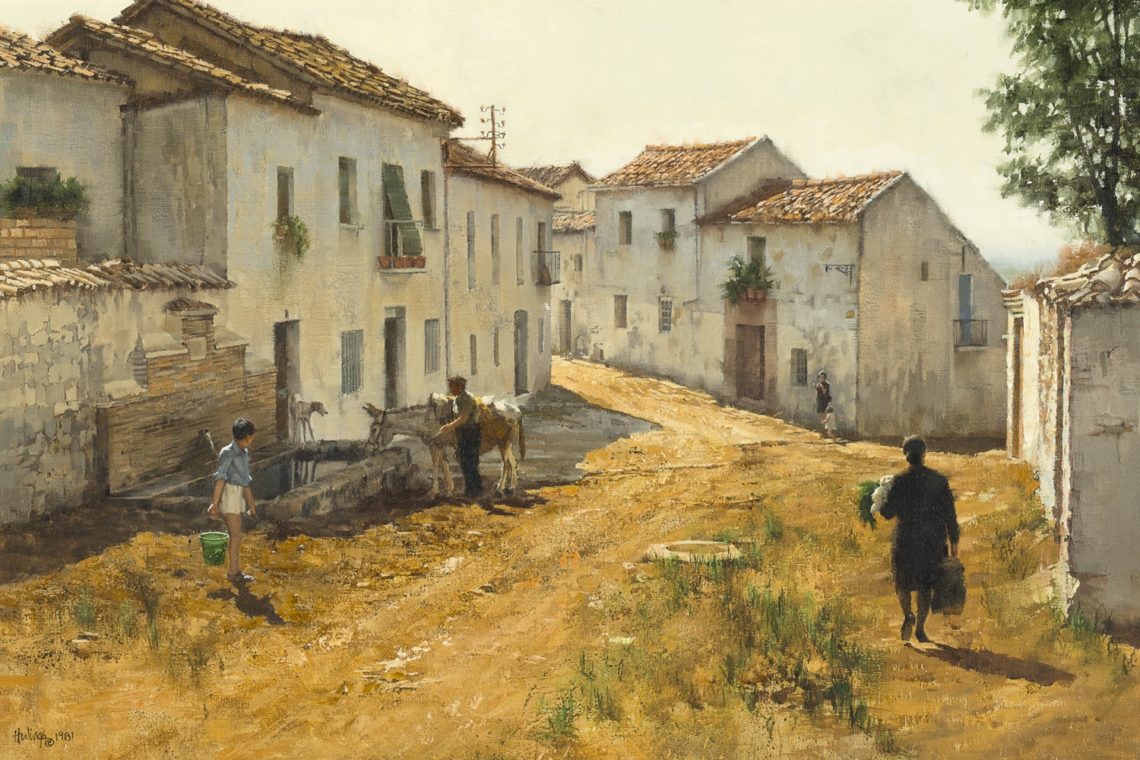 Auction Alert: Caramel From The Carmelites

“If you look at this spot in Ubeda today, you’ll find a paved street and no donkey, but the cistern is still there, the white walls are still crowned with terracotta tiles, and the hot sun still beats down, driving the thirst of all toiling under it.”

The “Freshly Revealed” title for our weekly Hulings article often refers to the idea that we’re letting you in on an inside story. But sometimes it works the other way around, and new information is revealed to us! Thanks to our colleagues at the Santa Fe Art Auction, we now have an image of this Hulings 1981 Spanish painting.

In Watering Place at Ubeda the winding orange-yellow earth road flows around a corner of buildings, where daily life is unfolding. A man brings his white burro to drink from a stone cistern, where a lean greyhound is also considering a drink. A boy in a blue shirt with a green bucket looks back at them. Our visual anchor is the widow in her traditional black, carrying something white and some greenery. She looks ahead at the just-walking little girl in her white dress and her accompanying mom or older sibling.

Ubeda is in the province of Jaén, directly north of Granada, so if you were driving south from Madrid on the E-5, you’d hit Ubeda about 4/5 of the way to Granada. In 1972 we lived further south of Ubeda, in the little seaside village of Nerja, so my first instinct was that this painting was done from source material gathered nine years earlier—but that wasn’t the only time my father was in Ubeda. In fact, he was somewhat of a frequent visitor to the region. He just loved everything about it.

It’s also hard to pinpoint the date because Spain didn’t change much over the course of Franco’s reign, especially in the rural hills of Andalusia. Although Franco died in 1975, the return to the economic and cultural influences of the rest of the Western world took many years. So, although this looks like a snapshot from an earlier time, in fact it was created in the same year that then-Lady Diana and Prince Charles were married and “Raiders of the Lost Ark” came out. If you look at this spot in Ubeda today, you’ll find a paved street and no donkey, but the cistern is still there, the white walls are still crowned with terracotta tiles, and the hot sun still beats down, driving the thirst of all toiling under it.

A sweet part of the Ubeda heritage that still graces the area today, is the pastry tradition of the convent of las Carmelitas Descalzas or “Barefoot Carmelites”. Although the nuns are cloistered, you can leave your order through an opening in the door, deposit cash on the shelf, and wait to receive some of the best desserts on the planet: little bright yellow custards appropriately named “yemas,” which means “yolks,” crunchy “tejas,” almond and orange cookies, or choux pastry fritters called “suspiros de monjas” which translates to “nuns’ sighs.” When you eat them you’ll sigh, too!

Do You Know the Way…

Santa Fe Art Auction will be featuring Watering Place at Ubeda on November 10th along with several other Hulings works. If this classic Spanish slice of life appeals to you, you can send us a quick note and we will put you in touch with our colleagues.