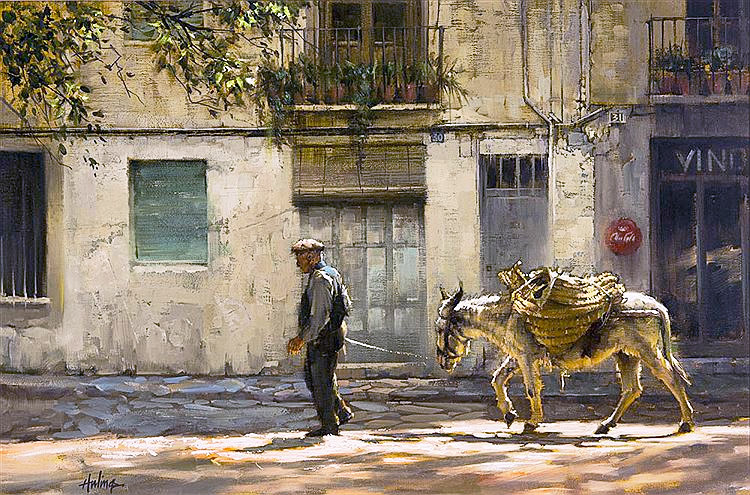 The scene is definitely Spain. I know this because, while the word in the window on the left, “Vino,” could appear in any Spanish-speaking country, the donkey is white and shaggy, the saddlebags are dark yellow straw, and the man is wearing that vest and sporting that beret. It’s the beret that clinches it for me. That absolutely places it in Western Europe, and “Vino” places it in Spain.

This Original Work is Currently Up for Auction

Since my father signed only his last name but did not date the picture, he must have painted it between 1963 and 1968. He signed his full name until after he returned to the US from Europe in the early 1960’s, and in 1968 my mother recommended he date everything. From then on he signed his last name and included the year. I am thankful to her for that recommendation every day!

The subject is one to which my father returned a few times: A man leading a donkey down a street dappled in sunlight. Roughly textured white walls and balconies full of potted plants. Simultaneously rustic, but urban, with lots for the viewer to ponder. Are they heading home for lunch? Do they do this everyday? Is he a delivery man? This one has a coca cola sign to add that modernist red touch.

This particular painting, “Old Man Leading Donkey” is included for resale in the upcoming Hilton Head Art Auction. Their estimated price is 20 times what it sold for originally at Grand Central Galleries in New York.