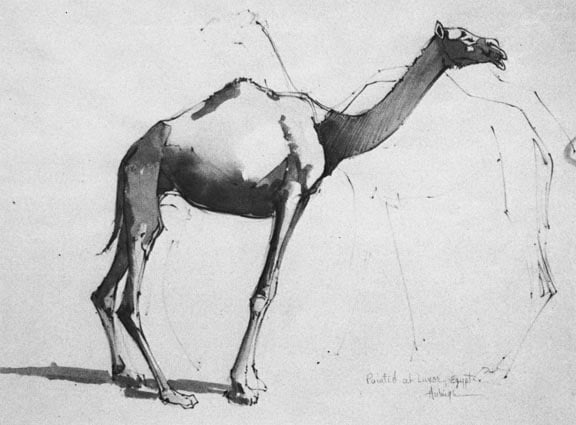 My father spent 1959-1961 traveling all over Europe and the Middle East. He went from the Arctic Circle to Southern Egypt, hitting most points in between. He reached Egypt in December, 1959, and stayed for almost two months. I’ll let him tell you a little bit about it in his own words (taken from previously unpublished archival material):

“I arrived at Luxor early in the morning on the train from Cairo. I went to the tourist office as soon as it opened to ask about a hotel, and the woman there told me what I already knew – that the whole town was full because of the Coptic Christmas celebrations. Then she told me about a rest house in a tiny village on the other side of the Nile, about 4 kilometers inland, and suggested that I try that until the holidays ended and then move to better accommodations in Luxor. 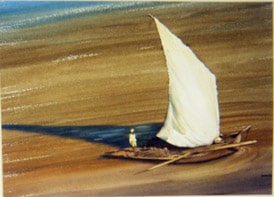 I hired a man with a sailboat to take me across the river, and then rode the four kilometers westward into the desert on a donkey. Once there I ran into a French engineer who introduced me to the Sheik in charge of the area. The Sheik offered me a room at the rest house, which he owned. It was very clean. Servants washed the sheets, towels and my clothes every day while I was there, and swept and dusted my room. But it was very primitive. There was no electricity or running water, only candles and basins. The food was terrific, though – lots of roasted goat meat and vegetables. 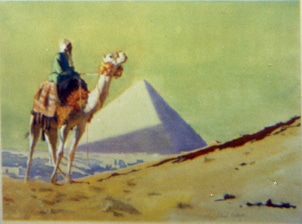 The Sheik was the head of five villages. I don’t know if he could have had anyone killed, but he was the leader and had great authority in the community. He invited me to his mother’s funeral, I think to demonstrate his affection for me, and to show that no one had better mess with me – I was with him! The funeral took place in a large tent with a sort of eerie yellow light coming through. It was all men, sitting in a circle, cross-legged. The men took turns saying things. I couldn’t understand any of it, of course, but it was clearly like a memorial service. These men were honoring this Sheik because he had lost his mother. I remember him sitting there crying. You don’t think of those people in a personal way like that, I think because they wear robes that cover them up so completely, but there he was, crying. I never learned much about the mother. She may have been somebody with influence herself.

They’d never seen an artist before. I know that. If not for the Sheik’s protection, I wouldn’t have been able to do all those drawings. If I went outside of his jurisdiction I could paint buildings, animals, but not people. The minute I started drawing a person, they would throw little stones at me. One day I was out with my watercolors and I got so involved with what I was doing – drawing a camel – that I lost all track of time. The Sheik sent two men out to look for me.”

The finished drawing of the camel that I include here is the one referenced above. Good thing that Sheik did extend his protection to my father or that drawing would not exist, and neither would I! Most interesting to me is to realize that that whole area is now underwater, thanks to the Aswan Dam. Happy holidays to everyone, however and wherever you spend them.