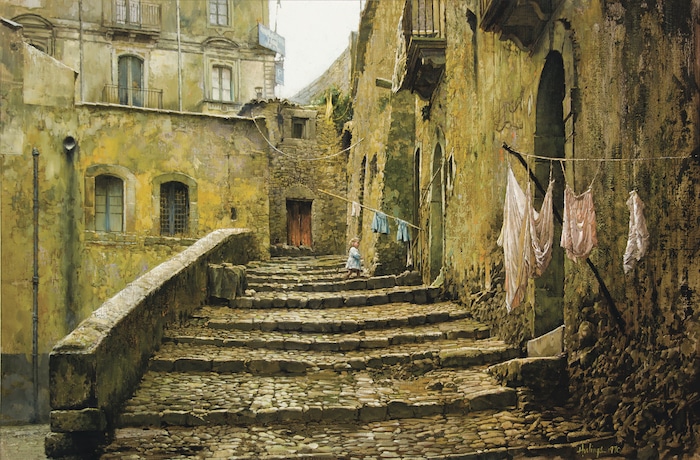 “This little blonde girl, having her mini-adventure, could be the great-great-granddaughter of Normans, Vandals, or Vikings.”

By the early 1970s, Clark Hulings’ subject matter as an easel painter had firmly landed: intricate compositions with traditional but not nostalgic subjects, strongly based in Europe and Mexico. Stateside, at this point, Clark was coming to the end of his years in Baton Rouge, and he, Mary, and Elizabeth were about to move to Connecticut to join a community of artists including Lougheed, Sloan, Lovell, Clymer, Kuhn, Gillian, and the framer Walter Skor.

In this 24 x 36” oil, “Blonde Girl, Sicily,” Hulings is coming into the height of his powers, making it look deceptively simple. The buildings and stone steps reflect light in multiple planes, with muted daylight at the top of the canvas, and shadow at the bottom. Weathering and patina in the architecture show age and history, and the pastel pink and blue laundry speak to the moment—just the routine housework of a regular day. Two faded blue signs grace the top of one of the buildings: there may not be cars in this scene, but if you look closely, you can see the “P” for parking, grounding the moment in the 20th Century. The diagonal lines of the laundry lead us to the little girl. She is up to something: she’s mid-step and absorbed in her own thing, not looking out at us. Has she been sent out to collect the laundry—those little blue clothes on the line that might be hers? Or has she escaped her house in search of bugs or stones or something interesting outside on the stairs? The second story window frames a figure peeking out, who may be watching out for her.

Sicily is an ancient place, and like many communities on the Mediterranean, a cultural melting pot. Fast-forwarding past the thousands of years represented by Pre-History and Classical History; the Sicilian Middle Ages started with a Germanic invasion by the Vandals (if you’ve ever wondered where that word came from!), and ended when the Vikings were conquered by the Normans. The Kingdom of Sicily was ushered in in 1091. So this little blonde girl, having her mini-adventure, could be the great-great-granddaughter of Normans, Vandals, or Vikings.

Our friends at the Scottsdale Art Auction featured this stunning painting on April 9th and 10th, 2021 and it’s on its way home with a lucky collector!