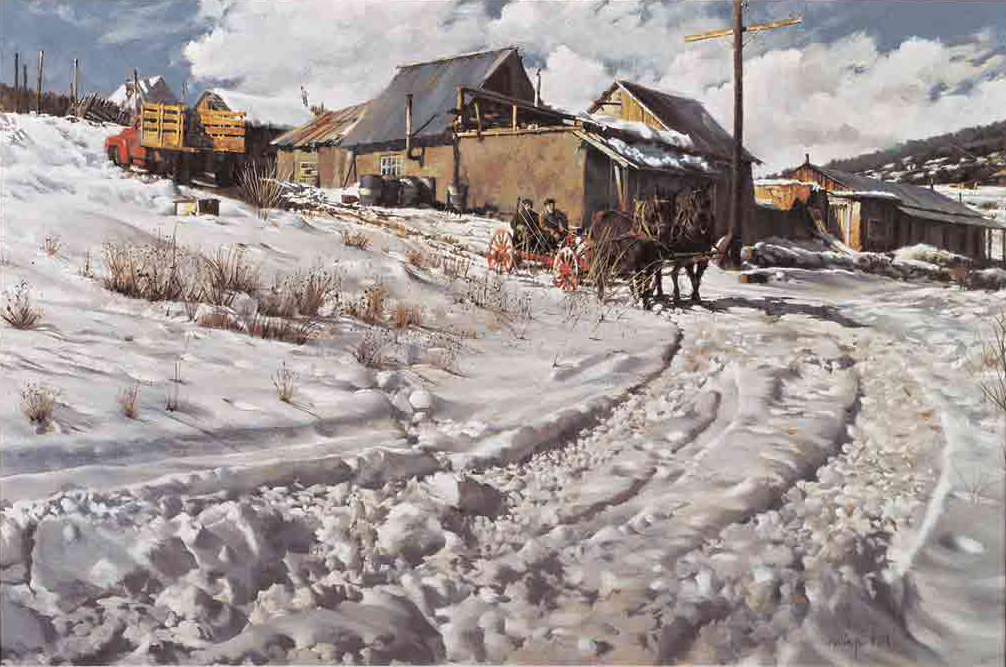 A mule train works its way up a steep canyon trail, deep in snow. In the depths of a Montana winter, powerful draft horses pull a wagon driven by a man in a cowboy hat; his cows graze beside them on a small patch of hay. A reconstruction of a 1900s scene in Santa Fe features a man in a pink shirt and a golf hat. Wait…what? That kind of curveball is pure Clark Hulings.

As you may know, we’ve been interested in the unexpected ways “The West” comes to life In Hulings’ work. In an oeuvre that is so strongly based in Europe, Northern Africa, and Central America, why did the Western Art world become so fascinated with him, and how did Hulings navigate his own vision within it? Bending conventions to leave colonial nostalgia by the wayside, introducing us to human beings fully engaged in their own lives, creating immersive landscapes—those were all part of it, but it’s not the whole story.

James D. Balestrieri, author of the upcoming book Clark Hulings: The Work of Art and the Dignity of Work takes us inside the “Western” part of Hulings’ career, revealing a few surprises along the way. This is the second excerpt of the book featured in a major publication this year! Read “Illusions and Subversions: Hulings and the American West” in Western Art Collector.

This major publishing project is growing every day, with new chapters completed and a visual layout in progress, a buzz in the art industry, and an incredible response to these “sneak peek” articles in prominent periodicals. The book is a key piece of the Hulings centennial legacy celebration that starts at the end of 2022. Find out how you can support it today.