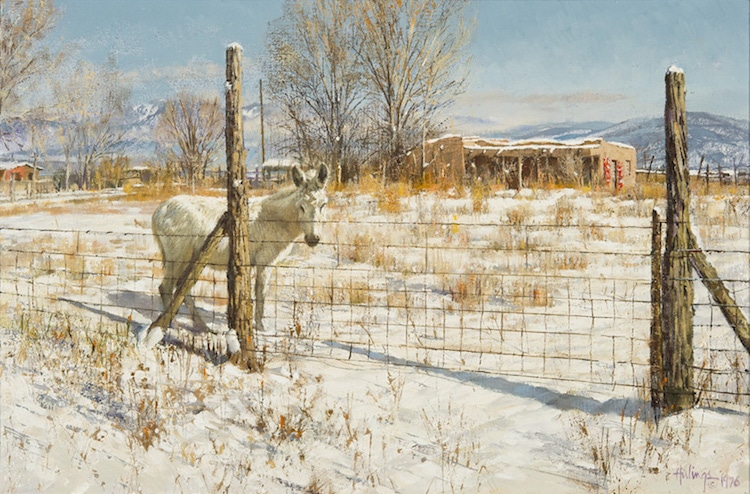 Quiet moments are hard to come by, but this painting really gives us a moment to exhale. Burro Near Talpa, NM is a 16 x 24″ snow scene—a study exploring the muted silvery gray-green palette Hulings used to such great effect in his French, Northern Spanish, and Louisiana works.

You may have paused for a moment, wondering why there was snow in Talpa! This painting is set in Talpa, New Mexico about six miles south of Taos; not Talpa in the province of Jalisco, Mexico. This part of New Mexico was part of Mexico proper until the War of Northern Aggression in 1848, and Mexicans still call Spanish-speaking New Mexicans “manitos”— referencing the “little hands” that were annexed by the border, or derived from a shortened form of “hermano,” the word for brother. It’s a good reminder that throughout history, state lines are ever-changing and cultures are often fluid, appearing on both sides of a border.

This white burro (or donkey, in English) probably had no worries about any of that. It’s signature subject matter for Hulings, who admired burros’ self-determined personalities, loyalty, and amazing capacity for hard work when treated with respect. This donkey is in absolute harmony with the landscape, with a similar scrubby texture to the snow, brush, and wooden fence posts around him, and gazing out towards the viewer. Although the overall effect is figurative, this piece is filled with textured, outside-the-lines brushwork and scratches. It’s definitely not photorealism, with its showcase of the physical properties of paint. Even in this meditative series of color values, we still see the surprise pop of bright red on the side of the building in the background.

If you would enjoy seeing this cooling view year-round, Burro Near Talpa, NM will be featured at the Scottsdale Art Auction this year. Let us know if you would like an introduction to the team at the SAA auction for more details.