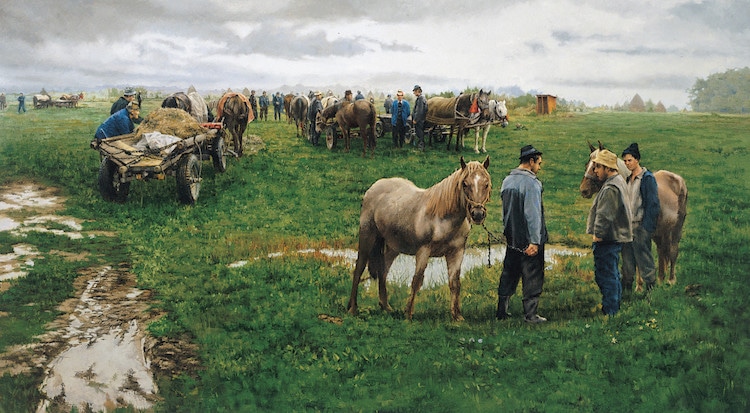 “Trucks and wagons were everywhere. Heated discussions were going on amidst goats, pigs, cows and sheep.”

Trading horses is a serious business. Even the expression “horse trading” is a standard metaphor for negotiations—used especially in business or politics, when each party is angling for something of value. In this piece, we’re seeing negotiations for actual horses in Eastern Europe.

Maze to a Meadow

In Hulings’ own words: “We were driving around Romania hunting for subject matter. Mary looked up from her guidebook and said, ‘There’s a village nearby that holds a big animal exchange and auction on Tuesdays. Today is Tuesday.’ When we arrived there was great activity. Trucks and wagons were everywhere. Heated discussions were going on amidst goats, pigs, cows and sheep. I wandered through this maze to a meadow on the outskirts and came upon these horse traders.”

In past articles, we’ve talked about diagonal lines in compositions—but in this case, the diagonal becomes a swirl. The crowds of people and animals placed at various angles in the middle ground give focus to the three men and two horses in a semi-circle in the foreground. There’s a deep, curved shadow under their feet, and they’re angled around a big puddle in the field. The men are in involved in a conversation, but one of the horses looks straight out at us and becomes the focal point of the whole painting. This is a technique Hulings uses in many of his complicated market scenes, where the viewer could become overwhelmed without some guidance. He also accomplishes his perennial goal of pulling us right into the scene by establishing that direct connection with a living being. The viewer is that horse. In theater, this is called “breaking the fourth wall.”

Hulings made a preparatory study for this work “to make decisions about the mood and composition of the painting before tackling the large canvas.” At 26 x 46,” the final painting was a fairly large format for him.

Collectors of “Western Art” gravitate naturally towards all things equine, and some of them fought hard for this painting when it was sold at auction out of Hulings’ final solo show in 2007—even though the scene here is of Eastern Europe, not Western America. And while the subject matter is reminiscent of the American West, the vivid greens of the grass and the style of the clothes almost make us think this is one of Hulings’ Irish paintings. Inspired by the interest and technical challenge embodied in this scene, he made a rare exception to feature horses rather than his signature donkeys.

There is another level to the inspiration behind this painting: Hulings greatly admired French artist Rosa Bonheur (1822-1899) and was challenging himself to paint in her tradition. Bonheur is best known for “The Horse Fair,” which hangs in the Metropolitan Museum of Art in New York City. This work is on a massive scale: 8 by 16 feet. It took 18 months to create, with repeated visits to sketch the horse market on the Boulevard de l’Hôpital in Paris—she was only 31 at the time, and would dress in men’s clothes so she could blend in. Bonheur was a uniquely independent and very successful artist—even more trailblazing for a woman of her time.

Home with All the Horses

Both the finished version of Hulings’ Horse Traders and the working model are featured in the 2007 catalogue Timeless Beauty, which you can take home from our website store.