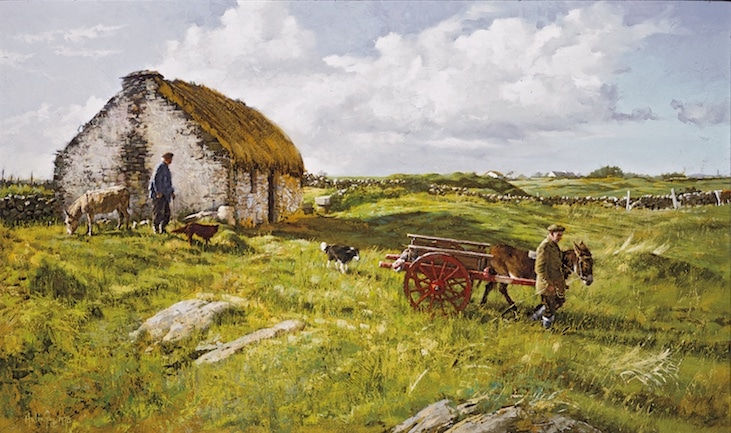 “The load of thatch has been left, the men and their dogs have bid each other farewell, and the donkey with the cart is led away.”

As we enjoy the holidays, we thought it might be time for some beautiful Irish greenery. The shortest day of the year has just passed, and no matter if you are celebrating Christmas, Hanukkah, Kwanza, or just some well-deserved downtime to close out the year, we’re all in need of a little brightness and cheer.

The Empty Cart was painted in 1978. That was an incredibly busy time for Hulings: he spent several weeks in the UK and Ireland in the fall, and it’s likely that the source material for this painting came from that trip. The Museum of the Southwest in Midland, Texas, featured a retrospective of 90 Hulings works that year, and this was shortly after he’d had a major solo sale show at the National Cowboy and Western Heritage Museum in Oklahoma City. He also managed to create almost three dozen oil paintings in 1978—one of the most prolific years of his career.

Hulings’ titles were often simple, and he used them to direct our attention or tease out a small element of story. In this case, the title speaks to where these gentlemen and their animals are in their work day. Hulings writes: “The load of thatch has been left, the men and their dogs have bid each other farewell, and the donkey with the cart is led away.” It’s a fitting moment as we think about the end of the year. This scene plays out in a stunning, windswept environment: Hulings is unrestrained in the rugged textures of the grass, rocks, the thatched roof of the house, and even the men themselves. Those on the lookout for the signature Hulings red accent will see it in the circle of the cart wheel—the visual hub of the composition.

This image was on the dust jacket of the first edition of A Gallery of Paintings by Clark Hulings . The Twentieth-Anniversary edition featured an equally worthy Spanish donkey, Sack Burro, on the cover, and a two-page study of The Empty Cart on pages 160-161. Clark Hulings Fund 2019 Business-Accelerator Fellow, artist Steven Lester, gave us the inspiration to feature this painting this week when he sent us this lovely photo of him enjoying his holiday gift. Hulings’ legacy lives on in so many ways.

We hope that you are celebrating your family legacy, the art and artists in your life, and the people and animals that work so hard every day to take care of us. Have a joyous holiday!