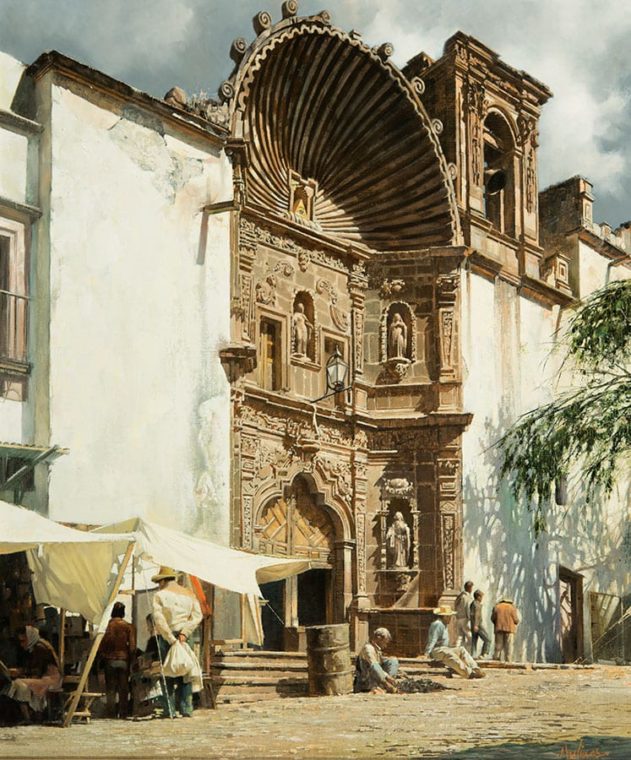 “The men strolling by and seated in front of the cathedral show the spectacular architecture as a host to life unfolding as usual.”

Clark Hulings loved Mexico, and he painted there throughout his long career. Ringing Bell (Nuestra Señora de la Salud) is set in San Miguel de Allende and was painted in 1965, a formative time in his development as an easel painter. Certain characteristic elements of his work emerged quite early. For example, cathedrals—although he was famously, and wrongly, once told that no one but Catholics would want to look at them—are one of his recurring motifs. La Basílica de Nuestra Señora de la Salud went through its major construction in the 18th century, and the main portal is in the “Churrigueresque” or Spanish baroque style.

Tarpaulins are also recurring elements in Hulings’ paintings, both because of the strong visual feature of the fabric and rope pulling across a scene, and because they are a reminder of the hard work of the vendors who set them up and are shaded by them on a long day. We see them in some very important Hulings market pieces, including the iconic Kaleidoscope. Here, the tarps in the lower left corner mark the edge of the market. They represent humble, temporary structures contrasting the expensive, permanent building behind them.

The Divinity of Daily Life

The men strolling by and seated in front of the cathedral show the spectacular architecture as a host to life unfolding as usual. The vantage point looks upwards—heightened by the long portrait orientation—with the curved arc of the shell-shaped roof touching the sky. Hulings has rendered the church’s carvings in stunning detail, making the inset-shadows of the alcoves pull back from the highlights of the icon statues they house. The tree on the right is also an interesting area of the painting, with its complex shadows cast on the walls showing the natural world touching the man-made structure. We often see a modernist red accent in a Hulings painting, but here’s it’s orange, and visible in the market just above the shoulder of the man holding his shopping bags behind his back.

San Miguel de Allende has its origins as an indigenous Chichimeca village; in the 16th Century colonial era, it was on the thoroughfare between Mexico City and the silver mines of Guanajuato and Zacatecas to the Southeast. More than forty years of conflict in the Chichimeca War ended in defeat for the Spanish military. It was the birthplace of two key figures in the early 19th Century Mexican War of Independence, and after a quiet hundred years or so, was re-invented as an artist’s hub in the 1930s by an American and a Peruvian: writers and artists Stirling Dickinson and Felipe Cossio del Pomar.

Soldiers Give Way to Artists

San Miguel still boasts a tradition of internationals working in creative fields. After the second world war, foreign art students, particularly former US soldiers on the GI bill, began to settle there to study at schools, including the Instituto Allende and the Escuela de Bellas Artes. The architecture remains a big draw for tourists and artists alike, and UNESCO designated the city as a World Heritage Site in 2008.

Ringing Bell (Nuestra Señora de la Salud) is 30 x 25″ and the second of three Hulings paintings that will be featured at the Scottsdale Art Auction on April 6th.