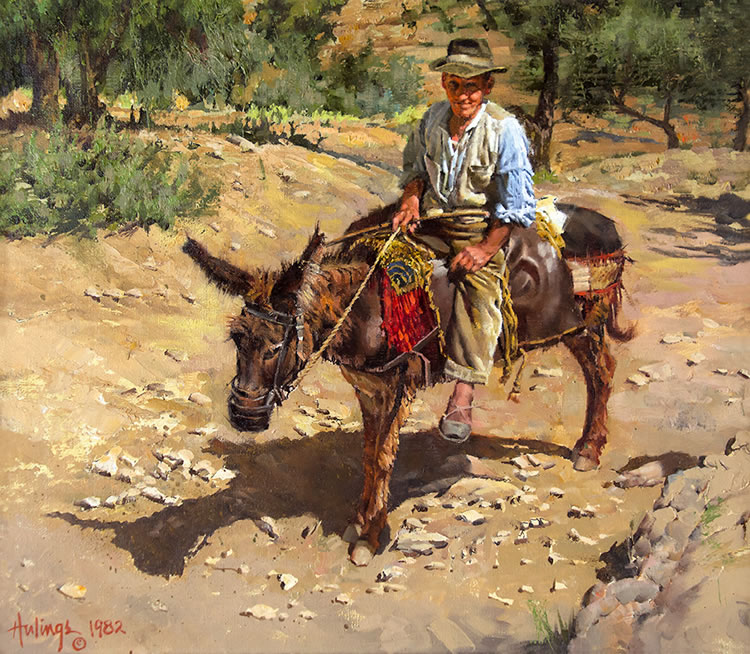 “The really Spanish touch is the stunning red accent in the saddle blanket that anchors the composition, not to mention showing-off the proficiency of the local textile-makers. “

Is there anything more classic than a Hulings donkey—or in this case, because we’re in Spain, a burro? This 14 x 16″ piece was created in 1982, which was an important time in the market for Hulings’ work. Far from the grand scope of Kaleidoscope, which sold for a record-breaking $310,000 the year before, this is an intimate genre painting depicting a moment in the life of a hardworking duo. It was most likely conceived in his month-long trip to Spain and France in 1981.

The title Jose on Maria-Spain has a little sense of humor. Ever a fan of the friendliness and fearlessness of burros since his own childhood years in Spain, Hulings has shared the name of this shaggy gal and made her an equal character in this small story. This title also reveals a little about Hulings’ process—clearly, he had a conversation with José in which he most likely learned not only the name of his donkey, but as much as he could about other possible subject matter in the area. Often he would take addresses and send photos to the people he encountered.

The viewer’s perspective is slightly elevated, as if we’re standing just above on higher ground. Judging by the angle of the animal’s shadow, the sun is beating down from overhead; it’s midday and perhaps almost time for a siesta. Jose’s face is shaded by his hat, and in a somewhat uncharacteristic choice for Hulings, he is looking directly at us with a bit of a wry smile. He may be midway through his agenda for the day, but he’s definitely stopped to say hello.

Hulings was masterful at making decisions about composition, edges, and color values that keep the viewer’s eye moving around a painting. Maria has some very interesting highlights: some almost-white accents on her left eyebrow, ear, and bridle draw attention to her face. The really Spanish touch is the stunning red accent in the saddle blanket that anchors the composition, not to mention showing-off the proficiency of the local textile-makers. The greenery in the background, scrubby as it is, gives us a refreshing change from the heat of the dusty ground. Hulings had a seemingly endless repertory of techniques to render texture: these trees show rough, impressionist-inspired brushwork with some wild, scratched-through places as well.

Bid on the Burro

If you think Jose and Maria belong in your art collection, you’re in luck! The Jackson Hole Art Auction will be selling this work in their September 13th-14th auction, and we will be happy to introduce you if you’d like to know more.