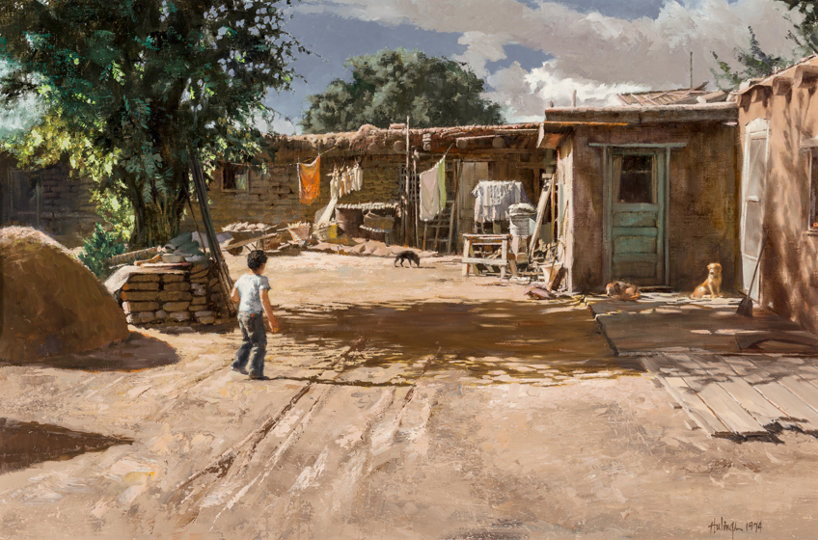 “If the boy is on his way back in, he’ll have to step over the napping dog, who doesn’t look like he’s prepared to move anytime soon.”

This 1974 work shows Hulings at the height of his easel-painting era. Two years after the family’s move to Santa Fe, there are a handful of Tesuque paintings from this time—in fact there is a second one coming up at auction that we’ll be sharing with you over the next few weeks.

Hulings will sometimes have an ironic or tongue-in-cheek reference in a title, and we see that in play here. For those of us who live in big cities, this is not the image that comes immediately to mind when we think of a mayor’s house—but with a population under 1,000, Tesuque’s municipal politics may be a little more down to earth. Just North of Santa Fe, the village boasts some accomplished people: Carol Jean Vigil, New Mexico’s first Native American state court judge; actress Ali McGraw, photographer Eliot Porter, and many others who wish not to be found. It’s a fancy address, but there’s no mail or garbage service!

This house more likely belongs to the Chief of Tesuque Pueblo—one of many Native American reservations in the state. The village doesn’t have a mayor, but the Pueblo has a well-defined governmental structure.

The little boy and the three dogs are out and about, doing their thing, and we assume there’s an adult who went inside after hanging the laundry to dry. Hulings sometimes includes a red piece of laundry as a color accent, but here it’s orange. It’s contrasting the almost electric green leaves of the tree, which in turn make us aware of the faded-green of the door. If the boy is on his way back in, he’ll have to step over the napping dog, who doesn’t look like he’s prepared to move anytime soon.

On the boy’s left is an traditional pueblo horno, where Native Americans bake their bread—more evidence that this house is on the reservation. The deep tire tracks in the foreground are another great detail, as they suggest that the mayor drives a truck, and may have peeled out of there in a hurry or been stuck there a couple of times in muddy or snowy conditions. All in a day’s work.

At Home with the Mayor

Tesuque Mayor’s Backyard is masterfully composed in a way that keeps your eye in perpetual motion, has particularly engaging use of color, and features a gorgeous display of chiaroscuro in the alternating bands of light and shadow. It’s coming up at Heritage Auctions in Dallas on November 8th with some early absentee bidding available as well. If this sun-soaked New Mexican scene belongs in your collection, send us a note and we’ll be happy to introduce you to our colleagues at the auction.