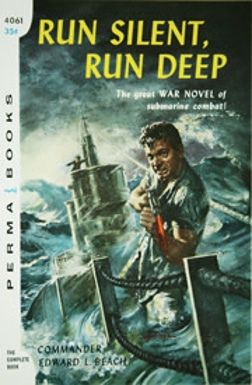 May the Fourth Be With You!

Today my son, Nico, turns ten. He is very proud to have been born on the most important holiday for boys his age — May the 4th: Star Wars Day. This Freshly Revealed post is in honor of him, and all the Star Wars fans out there.

Captain Edward L. Beach Jr. was a decorated US Navy officer in WW II and became a bestselling author as well. He was well-equipped to write about the stealth tactics of submarines: after serving on heavy cruisers and destroyers, he was transferred under water, serving on USS Trigger, Tirante and Piper submarines before becoming Naval Aide to Eisenhower. Run Silent Run Deep was the first of his 13 books. The story was made into a film a few years later starring Clark Gable and Burt Lancaster.

This 1956 Permabooks edition has a Hulings cover illustration, and it’s pure action hero. There are other covers of this book out there, but none of them go for the high-intensity adrenaline rush Hulings has created for this cover. The storm rages around the surfaced submarine: the churning green waters are cut with hard shadows, with aquamarine highlights and white foam snaking through the design. Thoughtfully, Hulings has enlisted the weather’s cooperation to shine a patch of sunlight behind our hero’s head of wavy hair and his broad shoulders, and there’s an arc in the clouds that frames the “conning tower” of the sub so we can see how precarious their angle really is. If you look closely you’ll see there’s a man hanging onto it for dear life. Our Hulings connoisseurs are always on the lookout for where he might feature a signature red accent, and here we see it as the fire coming out of the gun. This hero is undeterred by the adversity presented by the storm and continues to fight the enemy, his face showing unshakable confidence.

Holding Out for a Hero

As well as educating us about the experiences of war and providing a much-needed cautionary tale about the very real dangers of conflict, stories like this one also serve our need for armchair adventure. Many of us who have comfortable lives crave the idea of risk, and want to look up to brave and strong characters —in that sense we all have an inner 10-year old boy. In the past few generations movies do much of this kind of storytelling for us, and none have done it more famously than Star Wars. Taking naval battles up into space and adding wild technology and creatures, the fundamental fight between good and evil continues. Star Wars takes the spirituality theme seriously with the idea of “The Force” and the play of light and dark — George Lucas was inspired by Joseph Campbell’s understanding of modern mythology as he created what is still one of our pivotal stories of a heroic battle. Who doesn’t want a chance to look up from typing an email and pretend, just for a moment, that we are flying across the universe in a spaceship, or captaining a submarine?

You can still find copies of Run Silent Run Deep with Hulings’ 1956 cover on Amazon. It’s much more tranquil, but if you like the sea, you’ll see some of the same deep ocean greens and the shaft of sunlight in this (currently on sale) signed archival print of Hulings’ Sunday Afternoon – Riomaggiore; a painting he created more than thirty years later.