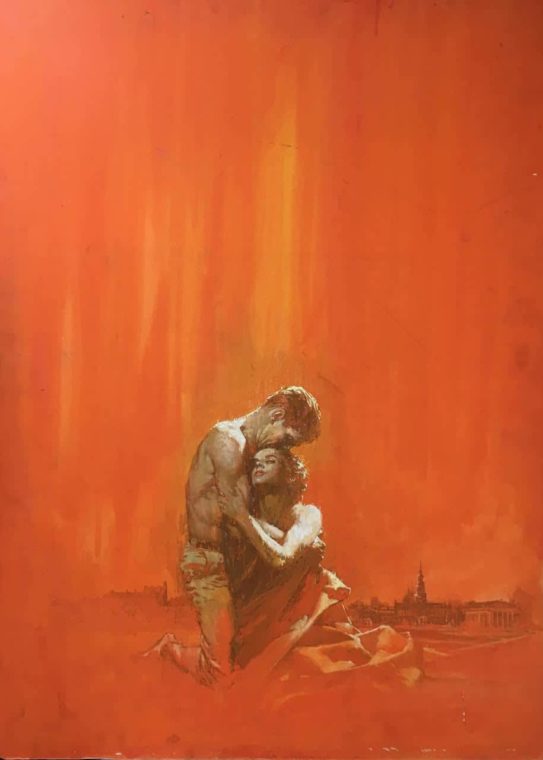 Update: Army Woman In Red Skirt sold successfully at auction at the end of September! Like a River of Lions is still available.

“The light pours down on them from above, and almost sparkles as it touches their skin and hair. You could lose yourself forever in that orange.”

Hulings’ 1950-60s illustrations are a unique part of his body of work. Many of them were created for pulp covers and were so successfully attention-grabbing that they’re now almost as enjoyable for the campy, sensationalist factor as they are for the artist’s skill. Not so with this one. Hulings’ original illustration for the cover of Tana de Gámez’s Like a River of Lions is simply breathtaking.

The long portrait orientation pulls the saturated oranges down to meet the lovers, and the liquid fire could be a city alight with conflict, or this couple’s passion, or both. With him shirtless and her wrapped in a blanket, they look as if they are on the run but they might not even mind. The light pours down on them from above, and almost sparkles as it touches their skin and hair. You could lose yourself forever in that orange.

This was probably the cover for the 1967 Paperback Library version of the book. Spanish-American author De Gámez was a renaissance woman: a freelance writer; a reporter and translator who worked for the US Office of War Information during WWII; radio broadcaster; professional touring guitarist and singer; and a dance historian with notable work on Cuban ballerina Alecia Alonzo. Like a River of Lions was her first novel, and features underground freedom fighters during the 1936 Spanish Revolution, apparently with a good dose of steamy love scenes and characters from the entertainment world.

We were very lucky to have a referral to illustration expert Fred Taraba from one of our collectors: he currently has this beauty available, so just send us a note if you’d like an introduction.

If you love illustrations, you’re in luck. There’s another one available that will be offered for sale by Hill Auction in Florida on September 26th. It’s circa 1956, and there are a few possibilities for which novel it was used; many of Hulings’ illustrations from that era were Signet, Cardinal, or Pocket books. The war-weary G.I.s look as if they’re walking through flooded streets, most likely in France. The seriousness of the drab olive and grey palette, the spikes of the trees, and the butts of the rifles are cheered-up by the promising presence of the lady in her red skirt. You can click here to email us about this piece as well.