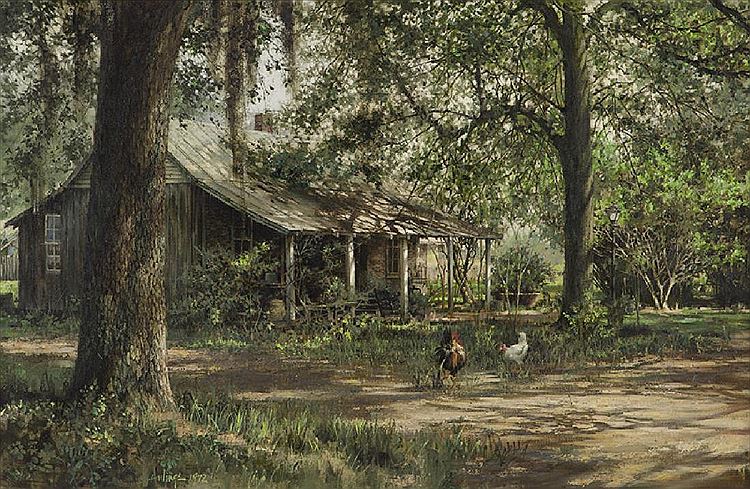 Update: this painting had a successful sale at auction in Dallas! Sending our congrats to the new owners.

“This is a rare opportunity for collectors to be able to get their hands on a very important Hulings work from the American South.”

Windrush Plantation is an important Hulings work from Louisiana. The painting had a particularly valuable sale at Scottsdale Art Auction in 2005—a standout moment in its rich provenance. Hulings spent formative years as a portraitist in 1940s Baton Rouge. This painting was created many years later, in 1972, but Louisiana remains a pivotal location is his work, and he continued to exhibit there well into his easel-painting years.

There’s a muted softness in this piece, with the shifting gray-greens and the dappled light coming through the trees. A strong tree trunk frames the left side, cutting through the triangle shape of the cabin roof. The doorway is deeply shadowed, mysterious and partially overgrown. A chicken and a rooster are confidently placed near the center, providing a signature Hulings red accent or two in the foreground. There is a complex play of textures in the trees, with hard, almost paint-splattered spikes in some of the branches, and soft Spanish Moss in others.

In Hulings’ Own Words

“My friend Steele Burden devoted his life to collecting the artifacts of Southern plantation life, ranging from kitchen implements to slave cabins. He built the Rural Life Museum, which is located on his own family’s Windrush Plantation in Baton Rouge.  We are fortunate to have people with such ingenuity, taste, intelligence, as well as a strong collector’s urge. This cottage was on the original plantation and is now part of the museum.”
— A Gallery of Paintings by Clark Hulings

In a region that still has a tourism industry that highlights the beauty of antebellum mansions, Hulings has asked us to spend a few minutes with the humility of this cabin, to contemplate a small part of the real story of plantation life.

This is a rare opportunity for collectors to be able to get their hands on a very important Hulings work from the American South. Dallas Auction Gallery will be featuring this work this week on Wednesday, November 14th. We’d be pleased to make an introduction for you if you’d like to know more.