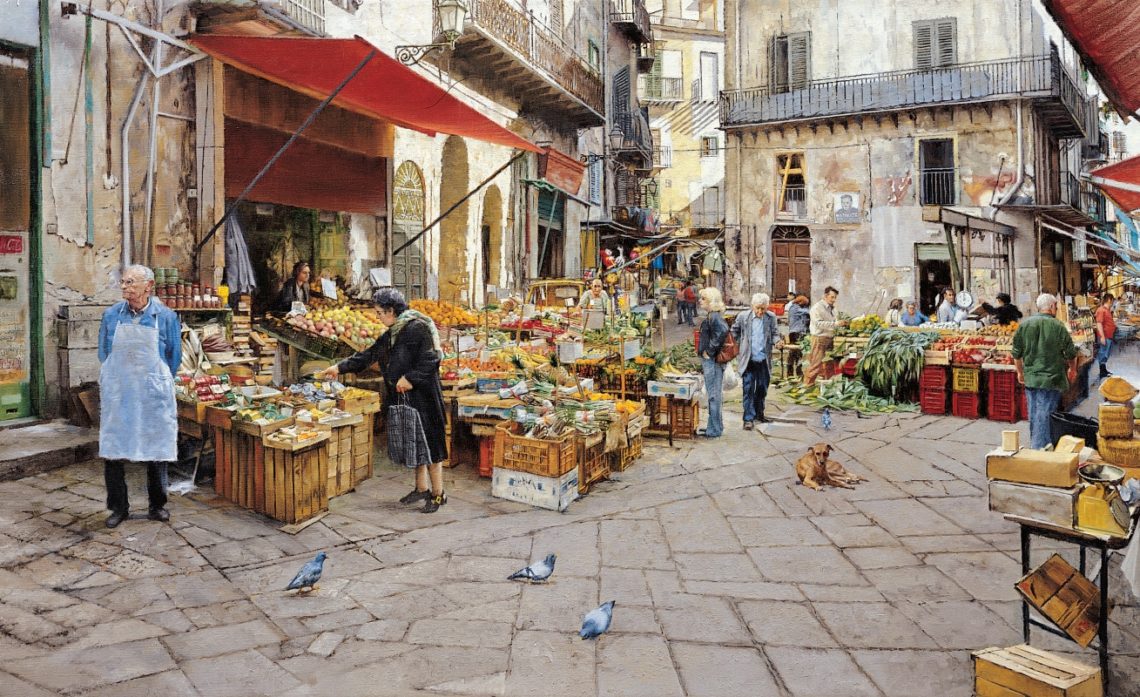 A Slice of Sicily

“‘La Vucciría’ translates as ‘voices’ or ‘hubbub,’ which we hear as vendors call out their specials and buyers haggle, as they’ve done for centuries.”

Busy. If you ask people of any tradition how they’re doing this time of year, they’ll tell you they are busy. Work, family, travel, hosting guests, holiday parties, shopping: it’s one big to-do list. So this week we’re not going to fight it, we’re going to visit one of Clark Hulings’ bustling market scenes and imagine finding some fresh vegetables and maybe sneaking an espresso and a pastry into the shopping trip.

Hulings was fascinated with markets and painted them all over the world. You’ll see almost endless permutations in how he has shaped the layouts of the markets in his body of work: vertical, horizontal, diagonal, prominent corners…it’s a painter’s version of how composers in music handle theme and variation.

A Trip to Italy

In The Vucciría Market, Palermo, we’re in the capital of Sicily. Palermo is an ancient city, settled in 734 BC, it was in the Roman Empire for a thousand years, under Arab rule for two hundred years, then conquered by the Normans. It’s still a major cultural hub, with millions of tourists coming to see its UNESCO World Heritage site churches, visit the third largest opera house in Europe, Teatro Massimo, and eat its renowned food. Agriculture continues to be an important part of the economy on an island known for its citrus groves.

Things in this open-air market are in full swing, with shoppers browsing produce, cheese, and hardware stands, all framed by red awnings; we see a triangle of pigeons pointing back to the dog who casually sits in the center of the action. “La Vucciría” translates as “voices” or “hubbub,” which we hear as vendors call out their specials and buyers haggle, as they’ve done for centuries.

The man in the blue shirt with the white apron on the left is our key figure here. With his gaze directed out and away from the scene, he may be relaxing on a break, or may be scouting for customers. The flat stones of the street are arranged to lead directly to him. To the left, you will spot a slice of the modern world with the script of the Coca-Cola logo just visible on a vending machine. This is a typical kind of reference for Hulings: although people have probably been selling oranges here for thousands of years, time marches on, and Hulings deliberately includes items that place a scene in the moment. All of us live in our version of the “modern world,” after all.

The Vucciría Market, Palermo is included in the catalogue Timeless Beauty: Pursuing Life’s Textures which you can pick up online at the Hulings store here. Books, prints, and giclées are still 20% with the HOLIDAY2018 code—order today if you’d like it to arrive in time for the 25th.