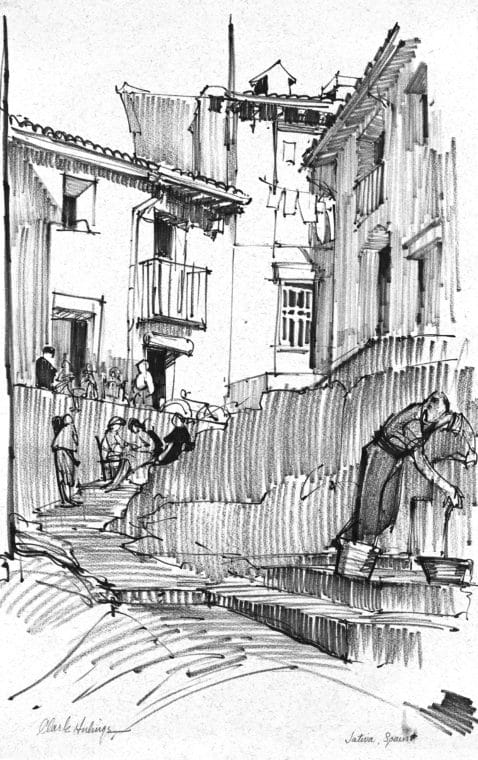 A Town of Many Spellings

Here’s a drawing I love. It’s of Játiva, Spain, a town from which my father harvested a lot of work. Játiva, a town South of Valencia, in central Eastern Spain, sits at the junction of a river and two railroads. Beyond that, it’s not really special in any way. For my father, though, its particular combination of hills roads and buildings was perfect. I know of numerous drawings and watercolor paintings, as well as at least three oil paintings, whose subjects derive from Játiva. As they say, “beauty is in the eye of the beholder,” and artists are here to show us the world through their eyes.

This scene, of course, is a natural, with its many levels, balconies, architecture and, for my father, laundry! He poached the people from other places — the man is from Mexico, I believe — and distributed them to add interest and balance to the composition. I’m pretty sure he made the drawing in 1961, while he was driving from a long stay in Nerja on the Southern coast, all the way back to Northern Germany, where his sister and her family were living at the time. Unlike many of his other drawings from that period, this one is very finished.

The thing I find interesting about Játiva, is the way in which its very name explains the history of the Iberian Peninsula. It is variously spelled Xátiva, Játiva and Xátiba. The first spelling is from arabic, and the “x” is pronounced “sh”. In fact, the great Sunni islamic legal scholar from the 14th Century, Abu Ishaq al-Shatibi, took his surname (or his most often-used surname, he had about ten different names) from his ancestors who lived in Xátiva.

The second spelling, Játiva, is Castilian Spanish, and the “j” is pronounced “h”. After El Cid conquered Valencia from the Arabs in 1094, and then ruled it for Alfonso VI, the Spaniards changed the spelling and pronunciation.

The third spelling, Xátiba, is Catalán and the “x” is pronounced either “sh,” or “j,” depending on the political proclivities of the speaker. In Spanish, “b” and “v” are pronounced in exactly the same way, the sound being halfway between our two English pronunciations. One of the most common spelling mistakes in Spanish, as a matter of fact, is to mix up those two letters.

Today, both Xátiba and Játiva are considered correct, depending on who you talk to.