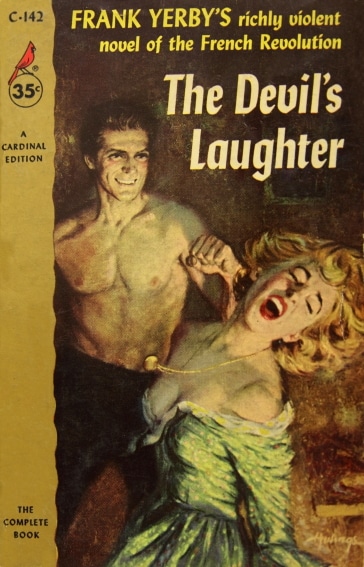 This book cover illustration of the Cardinal mass market paperback published in 1954 is a hoot! At least I think it is. It is lurid — the chartreuse of the woman’s dress more so than anything — and completely overblown. How can you not want to know more from seeing it? This is a terrific example of cover art as marketing, and of the sensibilities of 1950’s publishing mad men. the commercial illustrator was contract work for hire, and my father certainly delivered something here.

The novel is by Frank Yarby, a Native American/African American novelist best known for his 1946 Southern historical romance, the Foxes of Harrow, which became the first best-seller authored by an African American. It was ultimately made into a movie, but Yarby was not allowed to attend the premiere of the film because the theater did not accept “coloreds”.

Yarby was prolific, with over 30 novels to his credit, mostly superbly written, rollicking romances. This one, from 1953, is a sweeping epic set during the French Revolution. It is graphic, bloody, historically accurate and mostly about the love affairs its protagonist has with three different women. Jean Paul Martin starts out as a poor lawyer from the sticks, and ends up as one of the most important men in France.

I confess I have not read the book. Perhaps one of you has, or will, and then you can tell me how the cover and the title fit in with the description and plot? I would love to know. I’d also love to know where the painting is, and to get a good image of it.