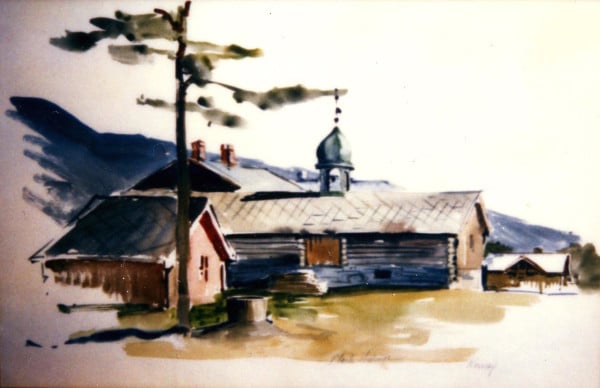 Here’s one from a batch of watercolors that my father painted while traveling around Scandinavia in the summer of 1959. He had struck up a friendship with a couple of German artists while studying in Düsseldorf. They had a tent and he had a car, so the decided to take a painting trip together. Apparently it rained the entire time and the tent did not hold up under the deluge. Fortunately, the car did, and my father painted many scenes like this from the relative dryness of its front seat. Not en plein aire, but on-the-spot.

A few days after embarking, my father and one of the other men began to realize that the third man’s hygiene was not of a sufficient level to tolerate within the confines of a small car and leaky tent. So the trip became an exploration of scandinavian saunas and baths as much as a quest for top fjords to paint. They traveled all the way to the arctic circle and back to Germany, so the ruse must have worked.

This little gem was sold out of a solo watercolor show of my father’s work in Tulsa, OK in 1964. The only photographic record of the show is some color snapshots taken by someone at the opening. Believe it or not, this is one of the best photographs we have. It is the only image I have of this painting. I don’t know where the original is today, but I would like to know, and I would like to have a good image of it, to know its dimensions, and where it’s been over the past fifty years!