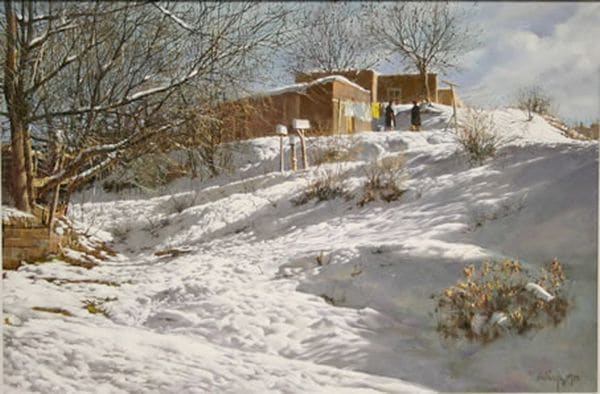 Here’s a terrific snow painting for which I have only a tiny image. My father painted it in 1973, and it was sold through Blair Galleries in Santa Fe, NM that same year. My father had not yet started having all of his work photographed professionally himself, and the owner of the gallery, Don Blair, usually just carried paintings consigned to him outside, leaned them against a wall and took Polaroids of them. So I’m lucky even to have this image.

It’s a Santa Fe scene. For those of you who know the town, Hillside Avenue runs parallel to East Palace Avenue, just up the hill to the North. It is an avenue in name only – last I checked, it was still a dirt road. The subtitle of the painting is “Washday.” It’s hard to tell from this small image, but there are two women in front of the adobe wall of the house at the top of the hill who are hanging out laundry. Leaving aside all of the other elements that attracted my father and made him want to paint this picture– the general composition, the weirdly tall mailboxes, and the mini moguls and valleys of snow, for example — the idea of these women hanging wet clothes out to freeze into solid blocks of ice fascinated him.

Santa Fe New Mexico sits at 7,000 above sea level, so the sun is very strong. It is high desert, so, as you can see from the clouds clearing in this painting, the sun is most often shining, even after a major snow storm. However, even the relentless New Mexico sun would not have dried those clothes quickly enough on that day. It was probably 15 degrees.

If anyone knows the current whereabouts of this painting, please let me know! I would love to have a better image to show all of you, and to update my records.