SANTA FE, NEW MEXICO – October 30, 2018 – Seven acclaimed paintings from the 1960’s to the 1980’s by renowned artist, Clark Hulings. Landscape, still life, and genre works from the U.S. to Mexico and Italy. And, the mandatory, beloved Hulings’ donkey.

On November 8, 2018, Hulings’ Tesuque Mayor’s Back Yard, is offered at Heritage American Art Auction in Dallas, TX. Two days later, November 10, six paintings are featured at the premier Santa Fe Art Auction in conjunction with the Gerald Peters Gallery. They include Tesuque Cottonwood; Watering Place at Ubeda; Pepito on Donkey Leading Donkey; Fodder for the Donkey, Gift for the Wife; Chrysanthemums, and Still Life with Mushrooms.

The seven paintings reflect the intensity and timeless influence of Hulings’ masterful artistry, work discipline, and philosophy. As with all the artist’s works, each provides resounding messages for collectors, artists, and viewers at large.

Hulings’ paintings place the viewer in other’s shoes and show other contexts that evoke individual insight and perspective. His relentless drive throughout a sixty-year career continues to galvanize artists and collectors alike to reach their own potential.

In addition, artists who study Hulings’ paintings and drawings see them as an apex of representational work to which they can aspire. There is a melding of techniques and ideas that offer a roadmap across the 20th Century from American Impressionists and Realists to their own creations.

“Whether he was depicting everyday life and landscapes in rural New Mexico, such as both Tesuque paintings, or donkeys and their owners in Mexico and Italy, my father’s goal was to dignify life in the vast, complex, and yet fragile world in which we live,” said Hulings’ daughter, Elizabeth.

“He would be pleased to see the variety of his works being shown at two of the most influential auctions in the country,” she said.

For information about Clark Hulings:

This work shows Hulings at the height of his easel-painting era. Tesuque Mayor’s Backyard is masterfully composed in a way that keeps your eye in perpetual motion, has particularly engaging use of color, and features a gorgeous display of chiaroscuro in the alternating bands of light and shadow.

Hulings sometimes has an ironic or tongue-in-cheek reference in a title, and we see that in play here. For those of us who live in big cities, this is not the image that comes immediately to mind when we think of a mayor’s house—but with a population under 1,000, Tesuque’s municipal politics may be a little more down to earth. This house more likely belongs to the Chief of Tesuque Pueblo—one of many Native American reservations in the state. The village doesn’t have a mayor, but the Pueblo has a well-defined governmental structure.

On the boy’s left is an traditional pueblo horno, where Native Americans bake their bread—more evidence that this house is on the reservation. The deep tire tracks in the foreground are another great detail, as they suggest that the mayor drives a truck, and may have peeled out of there in a hurry or been stuck there a couple of times in muddy or snowy conditions. All in a day’s work.

This classic Northern New Mexico landscape shows the last gasp of fall, before the leaves fall off the trees and all the chamisa shrubs die and turn into tumbleweeds. Clearly 1976 was a good year in the area, because there’s water in the stream and all the chamisa are green and happy. Judging from the clouds, the monsoon hasn’t ended yet.

In such a natural scene, there’s an interesting architectural detail. If you look carefully at the shadow in the foreground, you’ll see that it shows a railing: Hulings is painting the scene from the vantage point of a bridge. It’s one of many examples of the artist “keeping it real”—sure it’s a spectacular portrait of nature, but the reality of human intervention and the artist’s place as an observer of the scene both get a nod as well.

Technically, Tesuque Cottonwood is stunning. The smooth, romantic realism of the clouds directly contrasts with the percussive technique he’s using on the tree—it’s one of many examples of his work that shows influences ranging from Thomas Moran to Jackson Pollock in the same painting. The composition is classic, with the strong presence of the tree in the upper left corner creating a diagonal line. It’s full of life and movement and suggests nature has a few surprises left for us.

Úbeda is in the province of Jaén, directly north of Granada, so if you were driving south from Madrid on the E-5, you’d hit Úbeda about 4/5 of the way to Granada. In Watering Place at Ubeda, the winding orange-yellow earth road flows around a corner of buildings, where daily life is unfolding. A man brings his white burro to drink from a stone cistern, where a lean greyhound is also considering a drink. A boy in a blue shirt with a green bucket looks back at them. Our visual anchor is the widow in her traditional black, carrying something white and some greenery. She looks ahead at the just-walking little girl in her white dress and her accompanying mom or older sibling.

Hulings lived in Nerja in 1972. Francisco Franco’s Spain didn’t change that much over those years, especially in the rural hills of Andalucia. Although Franco died in 1975, the return to the economic and cultural influences of the rest of the Western world took many years. So although this looks like a snapshot from an earlier time, in fact was created the same year that then-Lady Diana and Prince Charles were married and “Raiders of the Lost Ark” came out. If you looked at this scene Úbeda today, you’d find a paved street and no donkey.

A sweet part of the Úbeda heritage, still gracing the area today, is the convent of Carmelitas Descalzas or “Barefoot Carmelites” pastry tradition. Although the nuns are cloistered, you can leave your order through the door, deposit cash on a shelf, and then try the famous custard dessert yema, almond and orange cookies, crunchy tejas, or choux pastry fritters called suspiro de monja translated as “nun’s sigh.”

Clark Hulings loved donkeys. Just as they are cornerstones of labor in traditional ways of life, they were fundamental and recurring characters in his work.

These two paintings were created eleven years apart, and it’s a study in contrasts to look at them side by side. Pepito on Donkey Leading Donkey is 1969 and set in Mexico: Pepito is a little boy, riding a sable donkey with a saddle blanket, leading an even smaller saddled donkey; they are in dry grass and facing left. Fodder for the Donkey, Gift for the Wife is 1978 and set in Sicily, Italy, featuring an older man carrying a blue box and some greenery, riding a dark brown donkey in front of a stone building, and facing right.

Despite their differences, all three donkeys are particularly small and gentle-looking, and their riders both wear hats and have their gazes cast down in concentration. No matter where in the world and what age you are, there are things to get done. You’ll also see that although the palettes of both paintings are in earth tones, they each have lively accents. Both have a pop of bright green foliage. “Pepito…” has red and purple flowers mixed through the grass, some strategic deep green-black plants, a standing tree, and a fallen birch. “Fodder…” has the signature orange-red accent just under the blue box, a cleverly-placed dark window just off to the side of the man’s head, and a very detailed section of the wall on the right. 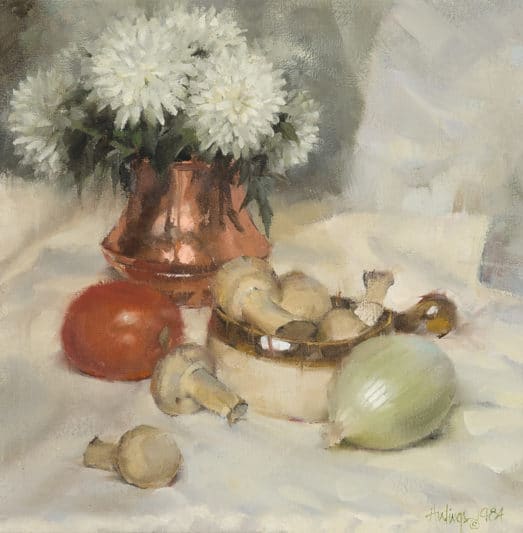 Still Life with Mushrooms, 1984, oil on canvas, 11 ½ x 11 ½”Hulings’ still lifes are a chance to see him work through very engaging technical challenges, and are an absolute must for flower-lovers—not to mention cooks. Although at first glance they may seem to be traditional subject matter, here, as ever, he is taking chances and doing some less-traditional things behind the scenes.

Chrysanthemums 1977 is the earlier work of these two, and at 20 x 24″ is the larger as well. The fold in the tablecloth, as well as the placement of the produce, create triangles that pull to the bottom center of the frame. The backdrop and tablecloth have wild, abstract use of color, particularly in the top left hand corner, where you’ll see blue, tan, pink, brown, and teal all having a big party so not to be outdone by the flowers and produce. When people note that Hulings is a “realist,” it’s interesting to consider these abstract moments and think about when—and why—he left these definitions behind.

Still Life with Mushrooms is 1984 and 11.5 x 11.5″ and a more intimate still life. One of the intriguing things about this piece is the flare of the shiny copper meeting the red of the tomato; they almost clash, and we know enough about Hulings’ understanding of color to know that he meant to do it. One idea about why—appart from the pure fun of the boisterous colors— is so that we seek out the calm and the matte texture of the mushrooms as a visual rest. He’s always rooting for the underdog.